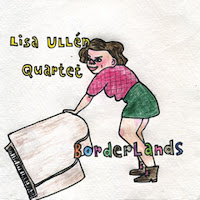 
The quartet of Swedish pianist Lisa Ullén is unfortunately not a model of a working band. Their discography features only three albums in the past decade, including the new one that follows the debut Big Bang (2006) and the sophomore Revolution Rock (2009), all released on Ullén's label, Disorder. But each time that this quartet reconvenes for a live performance or a recording session, one can expect to a very creative interpretation of the concept of free, improvised music.


Ullén herself was busy in recent years working with double bass player Nina de Heney, first as a duo and then as the Nuiversum trio with vocalist Mariam Wallentin and as a member of sax player Anna Högberg's sextet Attack. Her quartet feature highly prolific trombone player Mats Äleklint (Mats Gustafsson’s Fire! Orchestra, Paal Nilssen-Love Large Unit, Martin Küchen’s Angles 9, among many other outfits), who adds electronics to his palette of sounds, double bass player Nils Ölmedal and drummer Andreas Axelsson, all whom have played in the quartet since its inception.


Borderlands is an accurate description of the spirit of this album. The musical language is rooted in the European form of free jazz but this quartet takes the notion of freedom seriously, ignoring genres and rules, relying on an emphatic trust and deep listening. This quartet is a kind of a “new bird” as Ullén writes in a short liner notes. “It comes in many colors. It speaks in many languages. It isn’t pretty, but it’s always pretty wild”. She finds the quartet aesthetics close to the experimental, suggestive poetic language of Gertrude Stein, making it all “a magnificent asparagus and also a fountain” (quoting from Stein’s seminal Tender Buttons book).


Ullén is in charge of “concepts and ideas”, but these fragmented motives were developed in collaboration with the quartet. The opening piece, “Sisters, Brothers, Here’s Another” marks the colorful course, blending Monkish angular piano attacks with psychedelic interplay that suddenly is transformed into a tender hymn led by Äleklint. The dramatic, eerie atmosphere of “Waiting Room” with its distant electronics storms sound as an outtake from Pink Floyd recording sessions of Dark side of the Moon and “A New Leaf” sounds as a free improvised piece that is informed by the minimalist, electronic spirit of krautrock Can. The inventive, game-like interplay and the nuanced humor of this quartet is highlighted on “Now What” and “Won’t Be Late again”. The beautiful melodic abstraction is stressed in the way that Ölmedal and Äleklint weave their solos on “Midnight Conversation” or when all the quartet plays on the following, quiet “Room Full of Tunes”.


This quartet is indeed a rare bird, tasty as a fresh asparagus, and flowing with surprising ideas like a fountain of clear water.