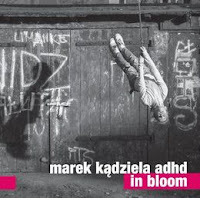 In Bloom has a somewhat more post-modernist feel to it than most modern jazz albums. This is nothing particularly new or surprising as a lot of modern jazz can be very eclectic in its range of influences. However, this particular album by Marek Kadziela’s Adhd seems to change its focus on style and form from track to track, not that this is a negative thing or done in a clichéd way.

To illustrate my point, the first track ‘Be-Bop Maker’ is as it suggests a piece of bop influenced music, ‘Rocky, Rolig!’ has a swing inflected rhythm, ‘May for MP’ displays a ‘cool’ vibe, whilst ‘Impro I & II’ contain the harsher avant-garde sounds. Then there’s the contemporary solo guitar etude of ‘Edithtiude’ with it’s quasi-classical picking technique, and the smoochy ballad of Thelonius Monk’s ‘Ask Me Now’, with it’s inclusion of an old radio broadcast complete with radio static and crackling sounds to conjure up a bygone era. In some settings this could come across like the band is trying too hard to show-off their diversity, which in itself can become a creative trap that skilled and talented musicians can fall into. But with Marek Kadziela at the helm the separate styles and elements, which could easily have been a disparate set of approaches, all come through Kadziela’s musical prism that gives the music a unified whole.

The group is a quartet of guitar, bass clarinet, double bass, and percussion with saxophone & trumpet guesting on some tracks. The sound of the album with it’s close-miked horns also gives it a slight flavour of retro-sound, making it more contemporary in it’s sound properties with older classic recordings and some of the styles that the pieces on the album clearly signpost. Others may hear it differently, but it’s interesting to note that’s how I felt about it and how certain sounds can point to similar or even non-similar experiences because of the way it makes us feel.

Overall this is a good album and it has been interesting to follow Marek Kadziela’s musical development over the last few years with albums such as Hunger Pangs, and 10 Little Stories, with Ksawery Wójcinski, having come before. In Bloom, in some ways, is a more mature statement of intent and it will be interesting to see where the guitarist goes from here.