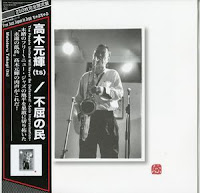 Mototeru Takagi is another unsung hero of the excellent Japanese free jazz scene of the early Seventies. A powerful stylist on the tenor saxophone, he also used the bass clarinet extensively and to great effect, recording with many of the best improvisers of those years, from Masahiko Togashi and Masayuki Takayanagi to Derek Bailey and Milford Graves. This new record, published by the Japanese label Chap Chap Records on CD and on a beautiful limited edition LP, documents a solo performance that took place on September 15, 1996 at Café Amores in Hofu, a few years before the musician’s untimely passing in 2002.

Takagi has always been characterized by a very aggressive tone on the saxophone, with usually short, tormented phrases and a taste for the most abstract expressions, even if his love for the blues was always perceptible. On the other hand, he was also interested in tone color exploration and the use of space and silence as integral elements of music making, showing a strong connection to the experiments of AACM on the other side of the ocean. In the last part of his career, he often preferred to perform solo, almost exclusively on the tenor saxophone, and slightly toned down his playing while retaining a strong personality and a fresh approach to the music. These later characteristics are all present in this album, and the first two tracks are a good example of this mode of expression: long free-form improvisations, often verging on the blues, with large use of silence to punctuate different sections, played with a beautiful and airy tone on the tenor sax. Throughout these tracks there are brief, skeletal hints to favorite melodies, like Deadline by Steve Lacy or Nature Boy and Brilliant Corners, underlining what can be considered the main theme of the whole album: a continuous flux of ideas merging memory and spontaneous expression, between nostalgia and research. The third and final track is an interpretation of a widely known political song, The People United Will Never Be Defeated!, written by Sergio Ortega and Quilapayún in support to Salvador Allende’s presidential election in Chile in 1970, that later became both the anthem of the resistance against Pinochet’s regime and a popular protest song around the world. This composition was a constant of Takagi’s solo repertoire and is a direct reference to the Seventies free music scene, in Japan as everywhere else a vocal and politically engaged community. The track begins with a pensive blues meditation, slowly evolving into the tune’s distinctive melody, distilled to its primary elements and presented here as a soulful, simple song, growing in intensity at every chorus until the final notes fade into silence.

The perfect ending to an exceptional record, a necessary reminder of a distant period of social and creative turmoil, and a powerful statement by one of free jazz most interesting figures.
Paul on Monday, March 14, 2016
Share