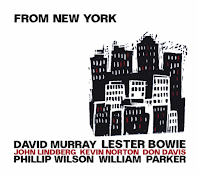 Here we have a three-CD set released by the good folks at jazzwerkstatt, one of the less-visible labels dedicated to keeping creative jazz and improvised music alive in these precarious times.  If it weren’t for jazzwerkstatt, it’s possible that iconic records like Charles Gayle/Rashied Ali/William Parker’s Touchin’ on Trane would still be out of print, which would truly be a loss.  And they’re also releasing a number of vital and important contemporary recordings, such as Silke Eberhard’s Potsa Lotsa.  So I feel a bit churlish in faulting them too much for their  shortcomings.  But even so, some of their decisions do seem very perplexing, such as this particular release.  Most of the music here is top-shelf creative jazz, so in that respect, I have little to quibble with.  But why these three discs, all of which have already been previously released by the label, are joined together here is beyond me.

The set is called “From New York,” or perhaps “New York Box, Vol. 1” – I’m not entirely sure of the definitive title.  But in any event, one might assume that all of the music here was probably recorded in New York City.  Well, no, that’s not the case, as the third disc, which features two groups with the great Lester Bowie, consists mostly of music that was performed at a concert in Berlin.  So maybe it’s because all the artists here have a strong New York connection?  Not exactly.  While that may be largely true of David Murray and John Lindberg, you can’t really make that claim for Bowie, for whom Chicago was typically home base due to his leadership of the Art Ensemble of Chicago and his involvement within the AACM generally.  True, the personnel on these records overlap somewhat: Bowie plays on disc one, Murray’s Live at the Lower Manhattan Ocean Club, and drummer Philip Wilson plays on both Murray’s and Bowie’s discs.  But that still doesn’t explain the decision to package these discs as having some kind of distinctive New York tie-in.  And the eras represented here are also very different: Murray’s and Bowie’s recordings date from the late 70s-early 80s period of some of the most important music coming out of the loft-jazz and Chicago scenes, while Lindberg’s is much more recent, from 2010.  Oh well.  I can’t make any more sense of it at this point.  But now that we’ve gotten that out of the way…

The music itself is great—especially Murray’s disc and disc two, John Lindberg’s Live at Roulette.  Live at the Lower Manhattan Ocean Club is one of the earliest documentations of Murray’s recorded legacy, so it doesn’t have quite the swagger and sheer dominance on the tenor that he would eventually develop more convincingly later in his career.  But the adventurous, spirited, soulful sound he’s always been known for is there in huge quantities, and it’s clear the band is having a lot of fun at this gig.  Bowie does take a while to get going—his solo on the opener, “Nevada’s Theme,” stumbles around a bit at times—but the two horns generally have excellent energy throughout the set, their shared just-off-center disposition giving the material both rawness and accessibility.  And the rhythm section, featuring Wilson and bass legend Fred Hopkins, is simply outstanding: fully in sync from the get-go, yet amazingly fluid and malleable in their rapport.  It’s no wonder that Murray worked so often with Hopkins in his groups over the years: the nimble musicality of his playing is joyous to behold.

Of the three discs, Lindberg’s (A)Live at Roulette was the real revelation for me.  I’ve long admired Lindberg’s prodigious bass technique, but here it’s truly sensational.  Listening to his arco work on “One for Ayler” or “Send Off”  is stunning.  But all his playing here is exceptional; the disciplined command he displays on the instrument is one thing he has in common with Hopkins, although their styles are very different.  Don Davis is also terrific on soprano/alto sax and bass clarinet, and Kevin Norton’s contributions on drums and vibes are superb.  All in all, six extremely tight and focused post-bop tracks, including “MC5,” a rousing tribute to the Detroit rock legends: listening to Lindberg’s electronically-distorted bass onslaught is another ear-opening experience.

Disc three, which consists of Bowie’s The Great Pretender and Steel + Breath, isn’t quite up to the level of the other discs, although there are certainly some inspired moments, especially on the opening cut, “Mother’s Mode and Peace,” a 24-minute free/modal performance of depth and power, with some fantastic over-the-top playing from Ari Brown in particular.  But much of the rest of the Great Pretender is fairly straightforward gospel music, and while it’s effective and well-played, and even stirring at times in its intensity, it’s not of particular value for its improvisational prowess.  Other tracks are enjoyable enough, such as the calypso-infused “Tobago, Tobago,” but aren’t especially noteworthy.  The Steel + Breath, tracks, the last three on the disc, are Bowie’s trio with Philip Wilson and William Parker.  The music is very good, with the second track, the freely-improvised “Philadelphia,” revealing Bowie in a particularly fiery mood--but the three tracks seem to be more of an add-on afterthought at just a little over twenty minutes total.

Since all of these discs are available separately from jazzwerkstatt, and there doesn’t seem to be any special-pricing incentive to buy the set, it’s hard to recommend the box as a whole as offering anything of value beyond the individual recordings themselves.  That, combined with the puzzling packaging, requires me to deduct a star from my review.  But since so much of the music here is exceptionally good, and worth owning, I’d prefer to end on a positive note by celebrating the vision and spirit that these recordings do offer in abundance.