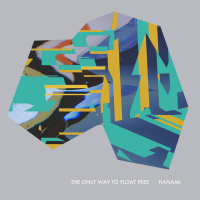 This is a recording that has been on high rotation in my playlist list for a bit of time now, and each time I come back to it, I find another interesting facet. I suppose an overarching description of the music is that it's meticulously composed, and I mean that in a few ways. While there is an overall strong sense of composition that guiding the playing, there is also a very graceful and musical poise throughout.

The rich tone of Jason Stein's bass clarinet, the bright pluck of Andrew Trim's guitar, the crispness of Mai  Sugimoto's alto saxophone and clarinet, and deft touch of drummer Charles Rumback, makes for slightly unusual combination that are used to the arrangements' advantage. The group began as a one-off for a benefit concert following the 2011 Tsunami disaster in Japan, and has blossomed into a more regular affair.

The Japanese word Hanami translates to a tradition in Japan of enjoying the 'transient beauty of flowers', and by drawing upon the sounds and shapes of Japanese folk songs and recasting them into modern jazz/rock arrangements, Hanami's (the band) songs' have a natural, and well crafted beauty. Each of the tracks have an organic texture and feel, the hummable melodies and rock solid rhythms are creatively arranged like a latticework that cultivates the improvisation.

'Shira Ito No Taki', the second track is a wonderful cascade of melodies that at times pour down and other times dissolve into a musical mist. 'Kita Nangano Motorcycle Gang' has a great edgy, dangerous feel, and the playing is purposefully unruly - a traditionally non-traditional jazz/punk piece. It's summarily followed by 'Hanaikada', in which a deep spring of refreshing melody is tapped, as the dual horns of Stein of Sugimoto entwine and react to Trim's guitar work. The closing 'Kojo No Tsuki', is a delicate and haunting folk song. Here it has been transformed into something between modern and old-school jazz, and is a tasty closer to the album.

Hanami presents a smart blend of traditional Japanese song and a range of musical influences. Hanami's continued exploration of this fertile sonic ground is a pleasure to hear.