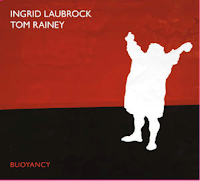 Recorded at the end of a 2014 US tour, Buoyancy is the second duo release from saxophonist Ingrid Laubrock and drummer Tom Rainey, a team who have collaborated on so many recordings that it’s really gotten hard to keep track of them all. Last year they played together on at least three records, including Laubrock’s Ubatuba project  and the under-recognized trio album Hotel Grief  (with Mary Halvorson). What’s clear in this more intimate format is the undeniable rapport Laubrock and Rainey possess, as their lines and ideas weave and develop through close conversation on each of these four freely-improvised tracks. Although the album feels relatively brief, at just under 45 minutes, there’s a lot of fine music on hand.

Laubrock is someone who seems to become more compelling with each recording. She has more than enough chops to hold her own with any of the fire-breathers, but she also brings a vital musical sensibility to her playing, with well-crafted phrases that always reveal a thoughtful logic. Listen to her bluesy sound at the opening of the title track, for instance: self-assured, languid lines that subtly begin to dance over the top of Rainey’s supportive contributions on the ride cymbal. And as Laubrock gradually moves into a more rhythmic, punchy mode, Rainey is right there to follow, creating an almost martial pulse as he elevates his volume and dynamism to match Laubrock’s. The ebb and flow of the track, whether in its quieter moments or in its more pulse-quickening ones, is always informed by the players’ impeccable sense of purpose and intuitive knowledge of what “fits” – clearly the result of years of shared music-making and a well-honed musical vision.

Other moments on the record are startling in their understated minimalism and delicacy: listen to the opening of the second cut, “Twenty Lanes,” as Rainey goes to his bag of tricks (crumpled paper, perhaps, and/or brushes) to make some unsettling sounds on the snare while Laubrock teases out long, sustained, barely-there notes. Or the album’s closer, “Thunderbird,” ironically titled as the track consists largely of Laubrock’s breathy, low-register drones, with Rainey offering only the most subdued support on brushes again, along with the occasional strike of a cymbal or a drum or two. It takes confidence to produce music that is so restrained and comfortable with space and openness, and it’s a tribute to these superb musicians that these moments seem so seamlessly integrated with their more feisty ones. This is a wonderful recording, well worth repeated listenings.
Paul on Monday, May 16, 2016
Share

Nice review. They are an exceptional duo.