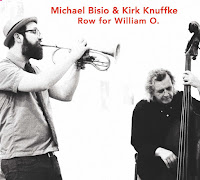 Following last year’s excellent Accortet, Michael Bisio and Kirk Knuffke are back together in the Relative Pitch catalogue—this time as a duo—with Row for William O. Better known in the jazz canon as Bill Smith, the clarinetist, composer, and teacher (Bisio’s) to whom the album is dedicated also holds parallel status in the modern classical world, where he identifies as William O. Smith. This strictly demarcated either/or divide between jazz and classical is perhaps belied by Smith’s association with the both/and Third Stream genre (for example his “Schizophrenic Scherzo,” composed for the Dave Brubeck Octet). A sense of balance and blend surfaces here not in style of the music but in the playing itself, which is as consonant as the album title’s rhyme and evocative of its image: Bisio and Knuffke both “rowing” with equal effort to keep the course true.

I’ve been in love with Bisio’s playing since first seeing him live with Matthew Shipp a few years ago. His approach to the bass has an energy and versatility that suits it well to the responsibility and attention required of and afforded by the duo (or even solo) setting. Whoever he’s with, Bisio is an intensely focused and deliberate musician, which allows him to achieve and maintain a profound sense of presence on his instrument. In some places, this means letting single tones hang and decay, as in the middle part of the title track. In others, as in his solo on “Oh See O.C.,” it means deploying a relentless barrage of notes (in this case building toward an obligatory but pleasingly deft “Lonely Woman” quote). His arco playing can be rich and densely textured at one moment and nimbly syncopated the next—for evidence see the album’s final track. Bisio’s ability to shift fluidly and convincingly from any one of these modes to another is part of the captivating magic of listening to him play. And yet for all his virtuosic capability and improvisational prowess, it should be noted that Bisio isn’t too proud either to lay down a straightforward walking line—which he manages to make as absorbing as anything else, the way great drummers can outplay technical show-offs with simple quarter notes on the ride.

In theory, this is where Knuffke has room to step in, but in practice, he finds his own openings. His cornet tone is intimate, almost dry, but not without bite, leaning sometimes towards the tactile (“December”), sometimes towards the lyrical and outright jazzy, as on the theme of the opener, “Drago,” or on the cathartic heights during the Neruda-inspired “I Want to Do to You What Spring Does to Cherry Trees.” A solo spotlight at the beginning of the final track “To Birds” further highlights Knuffke’s playing nicely. Ultimately, though, while the possible gradations of interactive dynamics in improvisation are many, my favorite moments on Row for William O. are those that ground the album’s overarching principle of tribute and influence on a concrete, fundamental level. These are the moments, again, of consonance, mutual reflection, and “rhyme,” where Bisio and Knuffke pay homage not only to Bill Smith (and to Ornette, and to Neruda, and to…) but also, in their sensitive interactions, to each other.

Row for William O. will be released on May 20.