These are the first words in Arthur Brown’s classic psychedelic rock song “Fire“ from 1968. During live performances Brown performed the song wearing a burning helmet. He literally hurls the famous opening proclamation in the listener’s face. The song is about what awaits sinners in hell, they have to burn and learn in order to get purified. In their best moments the music of Fire! (the exclamation mark is an integral part of the their name) can do this as well, their music can both torture and elevate you. The trio, which consists of Mats Gustafsson (saxes), Johan Berthling (bass) and Andreas Werliin (drums), tries to unite a free jazz attitude with rock elements and has even expanded this notion to an orchestra.

Over the course of the week, there will be reviews of their latest albums and a live concert. 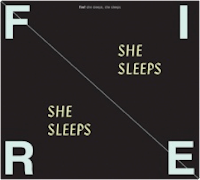 After the colossal debauchery of the Fire! Orchestra moloch Gustafsson, Berthling and Werliin broke it down to the bare necessities again - sax, bass, drums (and additional guitar or cello here and there). She Sleeps, She Sleeps propels the band even further back than where they started from with You Liked Me Five Minutes Ago. It displays the roots of the musical influences like blues rock á la Blue Cheer and uses it to reconstruct and highlight a different side of the band’s identity.

She Sleeps, She Sleeps begins like a metal album. Four massive chords that sound like chimes open “She Owns His Voice“, each of them lasts 14 seconds and they make up the underlying, basic pattern of the track. Then you get what has made Fire! such a great concept: In front of a solid background (here: the looped chords from the beginning), Gustafsson and Werliin drive the piece apart. The novel effect on this track is that Berthling, who is exclusively on double bass this time, follows them. On the previous albums he was the one who had held the pieces together with a steady pulse. Now the compositions put Gustafsson’s tone, his extraordinary phrasing, his immense lung-power and volume in the foreground. His playing is so mournful, angst-ridden and desperate, one might be afraid that he has just met the devil in persona.

For the title track Oren Ambarchi augments the trio. He has worked with them before on their (possibly best) album In the Mouth a Hand on which he had a very prominent role. Here he is very much in the background and polishes the piece by delivering icy textures that could serve as a soundtrack for a film noir.

For the last two tracks of the album, the trio is joined by cellist Leo Svensson Sander. But he doesn’t play the wide melancholic lines that are so stereotypical for a lot of cello music. His approach is rather percussive, in “She Bid a Meaningless Farewell“ he dances almost joyfully around the dark saxophone lines. Finally, “She Penetrates The Distant Silence, Slowly“ drags us even further down the gloomy road. On this last track Berthling plays a super-slow Black Sabbath riff on his double bass and introduces us to an utterly deserted and lonesome void, in which Werliin’s bells buzz around like lost souls. Gustafsson cries out a bruised blues picking up Berthling’s riff from the beginning, supported by short, high cello notes. Gustafsson and Sander even expand this riff and boost it with an extra portion of sadness and volume.

Additionally, there is a meaning to this album, which my colleague Colin calls “a long lament to lost love“. She Sleeps, She Sleeps is about the different moments of a relationship, about two people being one (“She Owns His Voice“), about the time when you are willing to make compromises although there might be enormous differences (“She Sleeps, She Sleeps“). Eventually, separation is unavoidable, brief and cruel (“She Bid a Meaningless Farewell“ - the shortest track) before - after a long silence - the former partners try to build up a new form of communication (“She Penetrates the Silence, Slowly“), with all the scars the relationship has left.

She Sleeps, She Sleeps has helped me to go through very difficult time in my life, it’s the album that I have been listening to over and over again since it was released. It has been a consolation, a catharsis and a support to me. On a very personal level, it is my album of the year. Thank you for this music, Mats, Johan, Andreas. It was there at the right time.

She Sleeps, She Sleeps is available on vinyl and on CD.

It's funny enough how we find music, but it's even funnier how music finds us when we need it. A touch, a glance, a voice, just the right time, to save us.

I just found your blog. Loving it too. Thanks.

It is a brilliant album is this, I much prefer it to the orchestra release tbh.

I hope you will enjoy our site for a long time, guitarmutt.
To Jason: I think that both albums, She Sleeps She Sleeps and the orchestra's Ritual, are excellent, although due to very different aspects.

I agree with you Martin:
they are both among the best albums of the year!