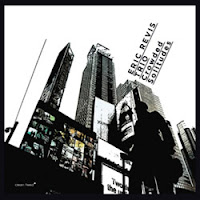 Eric Revis is an American bassist and composer who has been steadily building his oeuvre and expanding his reach (both musically and with regard to the players with whom he associates). In 2013, he released the excellent City of Asylum with Kris Davis on piano and the legendary Andrew Cyrille on drums. As a fan of Davis, particularly her work with Ingrid Laubrock and Tyshawn Sorey as Paradoxical Frog, I was immediately drawn to that album. Needless to say, it was a joy to hear, and it also held a few surprises, the biggest one being Eric Revis himself. He is an astoundingly adept bassist, moving from note to note with an elasticity and dynamism that aren’t easily matched. Together with Davis’s gorgeous abstractions and Cyrille’s sympathetic percussion-work, Revis’s bass made for a sumptuous sonic feast.

Now, the Trio is back, albeit with a different drummer. Instead of Cyrille, Gerald Cleaver is on the skins - and while it’s sad to see Cyrille go (his long association with Cecil Taylor make him a perfect fit for Kris Davis’s knotty clusters), that sadness quickly gives itself up to eager excitement; to anyone familiar with Cleaver’s work in the Farmers by Nature trio (with Craig Taborn and William Parker), Cleaver’s involvement on this record can only be a cause for celebration.

Straight away, the album opens with Revis’s probing, urgent bass - he glides along the strings, plucking with an infectious vigor. Within a few seconds, Davis and Cleaver join him, and we’re off to the races. As I said, Revis’s energy is infectious, so Davis is soon tumbling over herself, playing with a speed and suppleness that, while not uncharacteristic for her, are certainly never in so much abundance as they are here. Meanwhile, Cleaver rides the cymbals, in search of a rhythm steady enough to support the near-to-bursting paroxysms of his bandmates. It goes without saying that he succeeds!

After the equally-wild “Bontah,” the band reins it in a bit, and we get the lovely “Victoria.” It breezes by, Davis’s languid, romantic phrases combining with Revis’s pulsing bass and Cleaver’s sensitive brushwork to create a beautiful slice of melancholy.

“QB4R” shows the fantastic interplay between Cleaver and Revis: while Revis’s notes bubble up with all the effervescence of champagne, Cleaver acts as the bottle itself, giving shape to Revis’s ruminations and perfectly capturing their unresting vitality. The title track returns to the slower pace of “Victoria,” but imbues it with a sense of apprehension; this is perhaps due to Revis’s use of arco - Davis’s sparse piano-work is ghostly, but it is Revis that conjures up the most phantoms, bowing out wisps of sound that hang uneasily over the rest of the composition.

The longest piece here is the final one, “Anamnesis, Pt. 1 & Pt. 2 (For Tamir and Ms. Bland).” What is anamnesis, anyway? Well, the idea itself works on the assumption that humans have had many, many incarnations - anamnesis is the belief that knowledge (specifically, philosophical knowledge) has accreted in us through each incarnation, and the act of “learning” is simply the re-remembering of this knowledge. As to how this relates to the piece, I have no idea, but there is a genuine sense of movement, decay, and regeneration here. After the first section, a slow-spinning vortex of scattered notes and textures, the various streams coalesce and form a recognizable melody. It doesn’t take long, however, before the lazy river breaks up and becomes a series of rapids: Davis sends out pointillistic shards in every direction, while Revis throbs persistently underneath. Cleaver gives the piece a sense of subtle transformation and variation, moving between textures and rhythms with near-undetectable fluidity.

Crowded Solitudes is an exciting collection of music, and it shows each member of the trio at the height of their abilities. While it sometimes lacks the explosiveness that I admire in much of Kris Davis’s other work, it makes up for that with intriguing arrangements (thanks to Revis) and group interplay that highlights just what a modern piano trio is capable of.