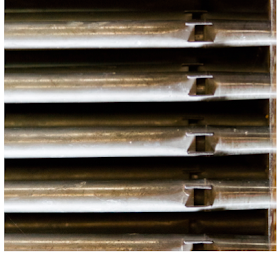 This is the second offering from the duo of Kit Downes and Tom Challenger, the first being "Wedding Music", an album of pipe organ and tenor saxophone duets using a conventional idea of melody and improvisation. "Vyamanikal", their new album, takes a sharp left turn musically, giving us a very interesting new perspective on the duos musical thinking. On "Wedding Music" Kit and Tom concentrated on their instruments as the main sound producing sources, on this release the duo have taken all aspects of their performance into account. Using everything around them to create a truly original musical vision which includes not only the two instruments, but also the ambience of each church and the sounds that filter into them. Recorded in 5 different churches in Suffolk, England, the duos label describes it as "[...] a collection of transcendent improvisations where the primordial moans and whistles of remote organs meld with gossamer saxophone.", and indeed they are!

Listening to this album a few names came to mind, ambient musician, Biosphere, the sound artists Tim Hecker or even the work of Ben Frost. Although this acoustic duo's music is far from the sonic world of the aforementioned artists, it does have some similarities. Downes and Challenger's music is made up in real time, with no electronic manipulation, but their interest in capturing, and using, the space that they perform in does come through. The sound of the pumps or vibrations produced from the different organs used, gives the music an effect like being in the engine room of a ship. Apart from these sounds you can also hear birds singing away (inside the church?), giving a very live feeling to what you are hearing.

The music itself is far from the bold melodic statements that came with "Wedding Music".  On this record everything is very minimal, low organ drones swirl around dissonant chords that hover in the air, rarely resolving in any logical sense. The saxophone of Tom Challenger almost caresses these rich organ sounds in a way that feels like he is coaxing a mythical beast (of some sort) out into the open! The two musicians build gradually on these strange and almost unnatural atmospheres throughout the seven pieces, finding imperfections and reflections in the church's acoustics which they develop into their drone quality improvisations. The result of this is that the duo has really brought together their musical vision in a very original, and although I speak of monsters and unnatural sounds the music is in its own way better described as spiritual and hypnotic.

Speaking of 'spiritual' may explain the title "Vyamanikal", which, as we're told, comes from an adaptation of early 20th century Sanskrit texts talking about aerospace technology and flying vehicles in ancient Sanskrit epics. Whatever the meaning, the music the duo makes is magical, or even spellbinding, in the true sense of the word.

Lastly, you'll have noticed I haven't described the individual tracks as, if you're curious, you'd do better to visit Slip's Bandcamp site where you can hear the album, meditate on the music, and even buy it - its a limited edition CD and/or cassette version.

Note: I'm not sure if there's physical CDs for sale, but, Slip kindly sent me a copy which comes in an intriguing presentation, and certainly well worth getting if you're interested in hard digital versions.