I can only feel jealous when finding how many good, and often experimental, left-of-center albums are released in Denmark, a country with smaller population than most European countries. Here is another collection of some of the finest of the Danish kingdom.  [see Meet the Danes #1] 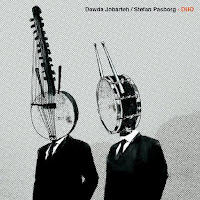 You can not but wonder how nobody thought of this brilliant idea before. Take some of the most seminal pieces of Afro-American modern and free jazz and transform them into African-tinged pieces, played by the West-African harp, the kora, amplified and with electric guitar effects, accompanied only by drums, but a hard swinging drums. This is exactly what Gambian, Denmark-based kora player Dawda Jobareth, who comes from a Griot family, and Danish drummer Stefan Pasborg, did. The two began to play together in 2013 but released only now their debut album. Pasborg is one of the most versatile figures in the Danish vibrant jazz scene and his output covers arrangements of modern classic compositions with The Firebirds trio, the fusion trio Ibrahim Electric, his Stax Tribute quartet, or his Free Moby Dick quartet that covers iconic songs by Led Zeppelin and Black Sabbath.

Charles Mingus' “Better Get Hit in Your Soul” or Don Cherry's “Mopti” never sounded so much charged with infectious-intense, driving dance rhythm. Jobarteh sound on both pieces as a proficient guitarist coming from the school of Sonny Sharrock, adding to the kora distortion and fuzzy effects, while Pasborg plays with his usual powerful manner and the two sound as a single massive group. Ornette Coleman's “Dancing in Your Head” is arranged as blend of funky African blues, à la Ali Farka Touré, matched with spacey-fusion harmolodic pulse. Albert Ayler's “A Change Has Come” has such an energizing-swinging rhythm that you can be certain that that kind of change is coming within seconds, while the effects-laden version of “Bells” sounds like a tribute to Jimi Hendrix. The four traditional-sounding pieces are less intense and more lyrical, still, stressing the immediate and deep rapport that Jobarteh and Pasborg have developed and the organic rhythmical shapes that both construct. Jobarteh soulful singing intensifies the emotional impact of pieces as “Kaira” and especially the touching ballad “Sundiata”. 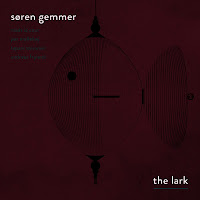 Pianist Søren Gemmer offers on his sophomore album, wise compositional ideas written for two quartets with a second soloist - one featuring Mads La Cour on the flugelhorn and the other with guitarist Per Møllehøj, both backed by the rhythm section of double bass player Tapani Toivanen and drummer Andreas Fryland. The second quartet played on who played on Gemmer debut At First (Ilk Music, 2013). The quartet pieces, intersected by short solo pieces and duets with La Cour.
Gemmer, are concise compositions refuse to resort to any obvious or established formulas, but still all highlight strong melodic and lyrical veins. All are delivered with organic and subtle interplay by the two quartets, playing with great patience and focus. These compositions offer different but brief perspectives on his intricate and carefully-crafted textures and nuanced compositional architecture. Slowly the overlapping ideas and motifs accumulate to a profound work of a mature and opinionated composer with a unique voice. Gemmer affinity with La Cour is quite impressive and both sounding as expanding each other idea, playing in almost telepathic interplay. 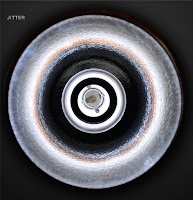 The free-improv Jitter trio is comprised of Danish, Berlin-based double bass player Adam Pultz Melbye, Swedish, Copenhagen-based reeds player Sture Ericson and Swedish, Malmö-based guitarist Anders Lindsjö. These Scandinavian gentlemen have a reputation of ones with a less than gentle attitude towards their respective instruments, still, all are very resourceful improvisers. All three crossed paths before and began to perform as a trio on 2011, aiming to explore “structural possibilities of abstract improvisation in the chamber context of reeds, acoustic guitar and double bass”. The trio already composed  music to the movie 'Passages' by a Swedish experimental filmmaker Claes Söderquist.

The trio debut album of  Jitter was recorded in Berlin during a heatwave in June 2013 and somehow reflects the maddening spirit of that burdensome time. The ten short free-improvisations offer an intuitive yet sometimes nonsensical and stubborn  interplay of the trio; an interplay that triggers varying types of uncompromising sonic collisions, inventive sonic searches and insistent attempts to create new sounds and textures. Surprisingly, such kind of interplay is quite liberating and suddenly and quite often the spontaneous improvised pieces find their inner meaning, course and often even an invigorating interplay a, for example,s on the lyrical “Et”. 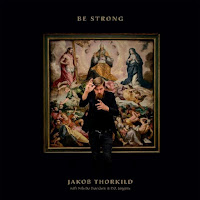 The title of guitarist Jakob Thorkild's sophomore vinyl (coming with a download option) describes his character and the album atmosphere accurately. Thorkild, who writes and lectures about music (he published a book about improvised music in 2011), is known from the BodaBoda Duo who recently collaborated with sax titan Peter Brötzmann (Modern Persuasion, Tryfing Music, 2015), returns to the same trio that accompanied on his  debut, Art Sleaze (Tryfing Music, 2014), experienced improvisers electric bass player Nils Bo Davidsen and drummer P.O. Jørgens.  The trio plays eight brief pieces, all improvised live in the studio and all titled after distinct characters, totaling in about 25 dense minutes.

Thorkild says that the album title can be taken as a “kind piece of advice”, and elaborates: “If you are a person who takes choices different from other people, you have to be strong. If you knowingly or unknowingly put yourself outside the community and outside the usual patterns, beliefs and behaviors, you have to be strong. Otherwise you break, and you are either forced to align, or you will fall”. He also refers to the unique manner that he perceives tones, harmonies and rhythmic attack. All are just abstract shapes and the actual sound of the instruments is represented for him by sonic colorful sonic images.

True to his idiosyncratic attitude, his music is a powerful and uncompromising blend of of free jazz, metal and punk. It is fast, dirty, intense and primitive, always pushed to  brutal, cathartic terrains. Some of the pieces as “Sophia” and “Lauretta” lock in such massive tribal-primitive groove that threatens to grind to pueces whatever stands near this trio. Others as “George” sound as featuring concise ideas echoing the ambient metal drones of American Sun O))) and “Babette” as referencing some of the most radical playing of Japanese guitarist Keiji Haino. 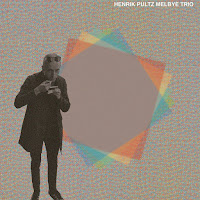 Sax player Henrik Pultz Melbye is known from his collaborations with experimental outfits as SVIN, together with guitarist Lars Bech Pilgaard, and Motherfucker, with guitarist Thorkild. He gained a reputation as a musician who insists on crisscrossing genres - free-improv, free jazz, metal, drone, post rock and even pop, with a distinct sound and phrasing of his own. For his debut album, he enlisted bass player Casper Nyvang Rask, who collaborated before with Adam Pultz Melbye in pianist Jeppe Zeeberg's Double trio, with drummer Anders Vestergaard from the power trio Yes Deer, and the Laser Nun duo, also with Pilgaard. The album was produced by trumpeter Kasper Tranberg. Again, this vinyl-only plus download option.

The Melbye Trio offers a bold, left-off-center and quite expressive take on the classic sax trio, suggesting new arresting sonic spectrum and new kind of interplay for this seminal format. The first side begins with”Dagliglivets Oase”, setting the course for the trio unorthodox and unwinding course. It is a minimal, contemplative sound poem. The following “Ud over stepperne” highlights Melbye's charismatic delivery and nuanced timbral search, reflecting the Ornette Coleman fast-shifting rhythmic dynamics while the balladic “Bal” unfolds in a conversational, subtle manner. The second side begins with the surprising, short bebop-ish”Mitä”, moves through the spare and mysterious of “Tungt” and the Ethiopian-tinged “Halli Hallo” mixed with calypso riffs. The trio concludes with a touching ballad, “Marskandiser”, played in  subtle, whispering tone. 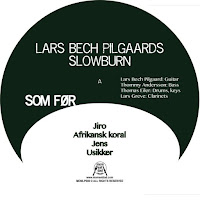 “Arrikansk Koral” defines the new incarnation of Slowburn. Pilgaard sets a strong, trance-like, repetitive guitar riff and around it Greve and Anderson construct a lyrical texture, disturbed by a metallic at the end of it. The cinematic, fragile solo guitar “Usikker” (insecure in Danish) suggests a distant, brazen scenery with its hypnotic, minimalist theme, while “Drømme” (dream) is another sparse, minimalist piece, with  repetitive, fractured yet sensual guitar lines, intensified by the dramatic bass pulse and the touching clarinet voice. “Etnisk” takes this minimalist formula further to mysterious, faraway sceneries, suggesting a gentle. Compassionate dance of the guitar and clarinet voices, suddenly pushed by Eiler tribal rhythmic shape.The last, title-peace (as before) connects the minimalist-ethnic vein to the seminal influence of Philip Glass soundtracks to the experimental trilogy of films of Godfrey Reggio (Koyaanisqatsi, Powaqqatsi and Naqoyqatsi), stressed by the dark, deep-toned bass clarinet of Greve. 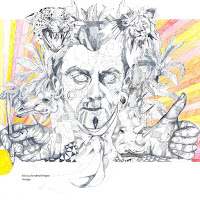 Klimaforandringer is another outfit led by Pilgaard, this time a septet incorporating elements from African street music and the Middle East to Pilgaard experimental language. The simple, poetic lyrics of Ånder (spirits in Danish) are described as revolving around universal human problems.


The group builds catchy, repetitive guitar lines laid above polyrhythmic African and sometimes Middle-Eastern or Jamaican percussive pulses, spiced with noisy and spacey-psychedelic keyboards sounds and dreamy vocals. Slowly the temperature rises and “Solen Brændte” (burnt sun) and “Masker” (masks) is already sounding as a cathartic, communal celebration that finally justifies the temptation to succumb to these hypnotic, laid back patterns, but, unfortunately, ending in an almost new-agey coda, the atmospheric "Onsdagsbarn", now sounding as a piece from early Vangelis repertoire.