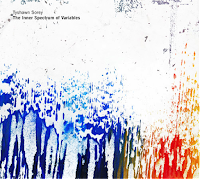 Tyshawn Sorey needs no introduction to the readers of this blog, as he has for several years been firmly at the forefront of creative jazz and improvised music.  He is the antithesis of the showy, extroverted drummer, as for Sorey the stress is always on the beauty of the collective music made by his groups rather than the chops of the individual players.  This aspect of his craft, combined with his unique compositional style, distinguish him as an independent and fiercely visionary musical force on today’s scene.

This extraordinarily ambitious two-disc release will certainly add to Sorey’s growing legacy.  Comprised of six pieces, all but two over twenty minutes in length, it gives Sorey and his counterparts plenty of room to develop their expansive palette.  Sorey’s established trio partners Cory Smythe (piano) and Christopher Tordini (bass) are joined by a string section including Fung Chern Hwei (violin), Kyle Armbrust (viola), and Rubin Khodeli (cello).  I should say right off the bat that the musicianship here is impeccable: precise and expertly played by all, these are virtuosos at work.  Sorey’s choice of string players was excellent, because they each have the flexibility and range needed to embody his distinctive musical ethos.  And the recording quality is also first-rate, with all of the nuances and subtleties of each instrument coming through clearly and effectively.

As for the music itself, it definitively straddles the two worlds of improvisation and composition, making it almost impossible at points to discern the difference between the composed and improvised sections of the pieces.  Sorey has spoken before of his indebtedness to Lawrence “Butch” Morris, who honed the approach he termed “conduction,” wherein improvised sections of a work would be guided or cued by the leader (http://jazztimes.com/articles/123065-tyshawn-sorey-remembers-butch-morris).  One can hear Sorey’s reliance on that influence here, especially on the third track, “Movement III,” which is made up largely of short musical vignettes, often involving just a couple of the musicians, in what sound mostly like freely-improvised segments, without a clear theme or melodic structure.  But if one listens to the second track, “Movement II,” one is struck by the beauty and elegance of what sounds to be a thoroughly-composed piece, largely showcasing the gorgeous work of the string players.  These examples aside, most of the music is less easy to parse, and hence it is best enjoyed by simply taking it in.  (Although it would be fascinating to watch this music performed live, as I do think it would be quite illuminating to observe Sorey’s role in “directing” the performance.)

Especially with two full discs of music, it does demand patience and concentration on the part of the listener.  But the rewards for doing so are many, as there are stirring surprises to be found throughout.  For instance, the opening of the second disc, “Reverie,” is comprised chiefly of Sorey’s sparse work on gongs and cymbals for the first several minutes, before he is eventually joined by the strings and piano, coming in individually and collectively with long, drawn out notes.  The emphasis here is on sound and texture, and the overall effect is meditative and reverential—until about three-fourths of the way through the track when the strings launch into a vigorously jarring closing burst that is gripping and stunning in its power.  In “Movement III,” we are treated to a funky, rhythmically complex opening that wouldn’t sound out-of-place on a Steve Coleman or Steve Lehman record, before the strings are allowed their freedom to explore completely different ideas; and then it’s on to another improvisational segment after that one.  While some of these concepts take perhaps too long in their development (my endurance was admittedly tested a bit during some moments of “Reverie”), the overall bounty of musical figures and stylistic juxtapositions on these two discs is impressive, and there’s more than enough fascinating music to warrant repeated and close listenings, as new dimensions of the pieces emerge upon each hearing.  And for those who like a bit more conventional post-bop, yes, that’s here too: a really catchy seven-minute Middle-Eastern-influenced portion of “Movement IV,” where Sorey proves that yes, he can certainly generate a groove when it’s called for!

This is one of those rare releases where one can say with confidence that something new and exciting is taking place.  Sorey is fast becoming one of the most intriguing musicians and composers of his generation, and if this music is any indication, it signals the opportunity for more creative work to be done in bringing the worlds of classical and improvised music into closer contact.  Truly a recording to be celebrated.

Really great review, Troy. So far, I haven't spent much time with this album. But you've given me a nice roadmap for when I do get into it.

Thanks, Lee. I'm sure you'll find a lot to enjoy with this record - it's really innovative and extremely well-played.

Thanks for the review on spectrum voice