One of the advantages of a label that relies on a local collective of musicians as the French, Lille-based Circum-Disc is the freedom to experiment. Circum-Disc was founded in 2004, enjoying the work of about 30 musicians of the Muzzix collective. The collective members include the French half of the quartet KAZE - drummer Peter Orins, who runs the label, and trumpeter Christian Pruvost, and the label offered orchestral and smaller groups projects with composer-guitarist Olivier Benoit, now the artistic director of the Orchestre National de Jazz (ONJ). Since 2007 Circum-Disc began to offer a new series, Helix, specializing in free improvised and experimental music. 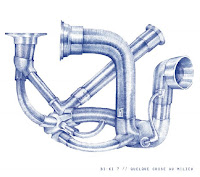 The alto saxophone duo Bi-Ki ? -Sakina Abdou and Jean-Baptiste Rubin,  has been working since 2012, investigating the sonic parameters of a meeting of two highly personal sonic identities, both playing the same instrument. Both Abdou and Rubim aim to explore different aspects of the timbral range of their instruments: the density, fragility and elasticity in different spaces, with an open, intuitive approach.

Quelque Chose Au Milieu (Something in the middle) documents the duo collaborative work with fellow French sound artist, sax and keyboards experimental player Jean-Luc Guionnet. Guionnet recorded the duo improvisations in five urban spaces and noteworthy architectural buildings - “listening stations” -  in the suburban town of Lille, Lomme. Each of these distinct spaces subjected its own unique sonic qualities on the duo playing and forced the duo to adapt its playing. Guionnet used these recordings as sound material, mixed and edited them into 12 pieces that often sound as a quiet, almost silent, sometimes windy and sometimes even dreamy soundtrack of a very calm and peaceful town. Only on pieces as “C3/C5/∞”, recorded at the Église Notre Dame de Lourdes, and on “SIb” and “C3/C5/∞”, both recorded at the Marché Min Zamin, this town sound as charged with busy, stressful  urban action. 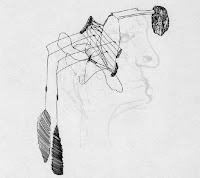 Guionnet often alternates between many left-of-center courses, all suggesting his unique conception of sound. Sound is as an elastic, fluid material that he can alter, sculpt and manipulate. Plugged Inclinations focuses on the bare basics of playing different electric keyboards, reducing the sonic output to mere electric current. Somehow it is an extensions of his approach to playing the church organ which he began to develop since 1993.

Guionnet compares the electric keyboards, mainly organs, to a “ship, a barque, a boat, a building within building”. He reconfigures the electric keyboard's stream of sound and its loose architecture as a pure and endless electrical current, of which he manipulates its blasts and peaks intuitively. He even compares this process to going back “in the machine as we go back in a train of of thought”.

The 57-minutes piece offers a weird feeling of being lost in waves of white noises that on one hand are so familiar from our home environment and daily life that we are hardly pay attention to them. But on the other hand the manipulated arrangement of these noises charges these sounds with a claustrophobic quality that is getting deeper and deeper, full of existential stress. 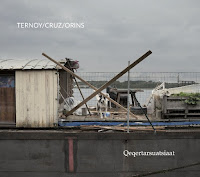 The trio of pianist Jérémie Ternoy, guitarist Ivann Cruz and drummer Peter Orins, known in its electrified version as TOC, decided to unplug and to go opposite to all characterized it before, i.e. energy, density, volume, excess, channeled into a twisted mix of post-punk-post rock-post jazz. This time the trio opted to explore the timbral range of their acoustic instruments in a minimalist, sparse and spontaneously improvised interplay. To add an exotic flavor to this album, the title is the name of small settlement in the southwestern Greenland, while the other pieces are titled after remote towns in Algeria, Ethiopia, Pakistan, Mongolia, Hokkaido, and Okrug, Russia.

The established interplay of the trio, solidified on previous three albums of TOC, as well as the extensive experience of the resourceful Ternoy, Cruz and Orins in many other projects contribute to the success of this sonic adventure. The trio knows how to sketch multilayered and intriguing textures that flow organically by their inner logic. Pieces as the atmospheric “Djanet”, “Gilgit”,  the mysterious “Wakkanai” or the weird, hypnotic rhythm of the title piece, dissolve any attempt to distinguish such improvisation from a written, well-crafted composition. All these pieces sound fresh, eccentric with its inventive approach, but surprisingly coherent. 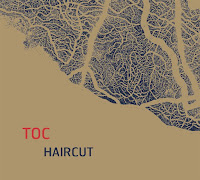 The third album of TOC - following their debut, a soundtrack to a wildlife documentary, Le Gorille (2009) and the sophomore work for a dance company, You Can Dance If You Want To (2012) -  is focused on different forms and levels of energy. Haircut is built as two consecutive pieces, and is an insistent, sometimes repetitive research of different modes of highly energetic interplay, built on the spur of the moment. The two pieces, “Half Updo” and “Updo”, do not settle on any pulse or structured progression, but developed as in waves and storms of effects-laden energy.

There are moments when TOC sounds as locking on a distinct form, as on the third part of “Half Updo”, in a heavy, spacey groove, almost with a dance-like pulse, or in the infectious, noisy beat on the beginning of “Updo”. But soon TOC transforms these muscular outpours into another sonic adventures that has an altogether different rhythmic characteristics, still charged with high-octane energy. Eventually all the energy is channeled towards the ecstatic climax at the end of “Updo” where TOC explodes in a fast, reckless and wild mode. 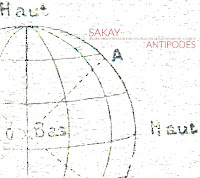 The Sakay quartet was born of an impromptu meeting in Lille on December 2013 between trombonist Jérôme Descamps who lives in Tahiti and the label regulars- double bass player Nicolas Mahieux and trumpeter Christian Pruvost and drummer Peter Orins.

Antipodes documents the quartet in the studio. The quartet experiments with different improvised forms of interplay, explores extended techniques and investigates their instruments timbral ranges. All is performed in an unassuming, open-ended approach, with no attempt to commit to any specific narrative or approach, and often within two-three.minutes pieces that suggest multifaceted exploration of a single sonic idea When the quartet stretches its sonic searches a bit longer as on “Architecture du Besoin”, “Distribution des Cartes” or “Bille en tête”, it sketches organically, arresting, eccentrically textured, full of invention, and rich with detail. 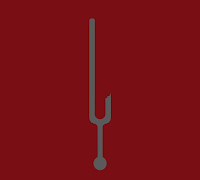 Quartet Base is one of long-lasting outfits of Lille, though La Diapason is only its sophomore album. This quartet is actually a quintet now, led by guitarist Sebastien Beaumont and featuring trumpet players Christophe Motury, who also sings, and new addition to the group, Christian Pruvost, who also plays the saxhorn, double bass player Nicolas Mahieux and drummer Peter Orins, who also adds electronics.

The eclectic repertoire references British, Canterbury-scene art rock groups as Soft Machine and Henry Cow, Frank Zappa groups, nineties incarnation of King Crimson, experimental and free jazz improvisation and clever pop songs sensibility. Quartet Base mixes such diverse elements into a wild ride, wrapped by the group tight and playful interplay, Moutry amused and often eccentric pathos is delivered with clever sense of humor and sharp sense of drama. Quite often Quartet Base sound as a French variation of the seminal great prog and fusion groups, especially on the demanding and wild virtuoso pieces as “That Too Much Hurts Me/Part 3”, but fortunately it lacks the pretentious approach these groups and it is much more open to sonic experimentation, as the impressive double solo on “Changes of Love/Part 1”..