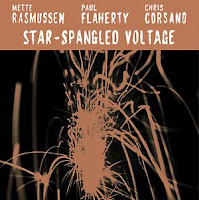 Chris Corsano, one of the most interesting drummers on the scene, is a specialist in sax duos. Among others there have been excellent collaborations with Joe McPhee, Virginia Genta and Paul Dunmall. His most long-lasting collaboration is the one with Paul Flaherty (since 1998), with whom he has released great albums like Low Cost Space Flights (FTR, 2014), for example. For this new trio project he has chosen Mette Rasmussen to support them, with whom he had released the very recommendable All the Ghosts At Once (Relative Pitch) in 2015. The Danish sax player is able to add substantially to the duo format, contributing a new layer of expressivity and complexity. Flaherty and Rasmussen haven’t worked with each other before, however there is an almost telepathic understanding you hadn’t necessarily expected from players of such different generations.

Star Spangled Voltage is the recording of a 2014 show at Never Ending Books in New Haven/CT. Three of the five tracks on this album present the two saxophones weaving wild lines around Corsano’s percussive outbreaks, there’s plenty of brutal high-energy playing with breath-taking and aggressive solos. Often it seems as if the three are chasing each other relentlessly through the free improvisations.

Then again, Star Spangled Voltage consists of obvious contrasts and similarities. On the one hand there are crisp articulations and clear sounds, circuitous “melodic“ arcs are confronted with short, sharp and abstract notes, hectic and nervous lines foil relaxed, vibrato-laden blues patterns. On the other hand the musicians often agree easily on common topics, exploring fields of sounds and structures in a similar way - as if they had been playing together for years.

A good example of this is the five-minute-explosion “c. 800 BCE (Hit the Ground Running)“, which starts with a high-speed drum solo before the saxophones drop in with dissonant and atonal outcries. Very briefly they accompany each other but then Rasmussen’s ultra-high pitches provide an alternative draft to Flaherty’s approach, it’s like a fight between the two of them, which is additionally fueled by Corsano’s drum attacks. The piece bursts of extreme intensity, it reminds of Arthur Doyle Plus 4’s classic Alabama Feeling from 1978.

And even as to the structure of the album there is a contrast: The pieces which are the exception to the rule are “Salt“, a duet between Rasmussen's prepared-sax and Corsano's bowed metal, and “In the Light of Things“, a conversation between Rasmussen and Flaherty. In the first one Corsano and Rasmussen use extended techniques compared to the rather classic playing on the rest of the album. Rasmussen contributes overblown, shivering sounds which are backed by Corsano’s fragile textures. The piece is divided into two parts, the second one is almost balladesque, a complete contrast to the first part. The latter one, the last track on the album, is a duo by Rasmussen and Flaherty, which draws a bow to “Salvaged“, the first track, with its extensive and bluesy phrases.

Star Spangled Voltage is an excellent album full of old-school fire music, a real feast of the senses for fans of classic free jazz.

Watch parts of the concerts here: