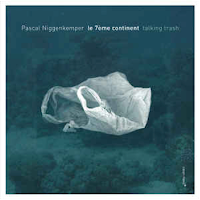 The Seventh Continent, also known as the Great Pacific garbage patch, is a huge area of about 3.4 million square kilometers (bigger than India) in the Pacific Ocean which consists of marine debris particles. The patch is characterized by exceptionally high relative concentrations of plastic, chemical sludge and other stuff which have been trapped by the two ocean currents of the North Pacific Gyre, creating an immense maelstrom.

Pascal Niggenkemper saw pictures and read articles about this phenomenon, and was fascinated. He drew parallels with his bass preparations which mainly include found objects, and was especially interested in the different consistencies and currents – he could literally hear and feel this phenomenon and wanted to transform it into music.

In order to realise his musical notions, Niggenkemper formed a sextet with himself on bass, Joachim Badenhorst and Joris Rühl on clarinets and electronics, Julián Elvira on flutes and Eve Risser and Philip Zoubek on (prepared) pianos (on track 7 Constantin Herzog’s bass replaces Julián Elvira). This makes for an exciting “different twins” concept; Niggenkemper speaks of “two identical instrumented duos or three identical duos, with the exception of the double bass, which has the sub-contrabass flute as its pendant.”

Niggenkemper uses three musical concepts for Talking Trash, providing a juxtaposition of musical ideas and sounds and employing both notated parts and improvisation. First, the confrontation of duos and trios which attempt to merge different rhythmic cycles and repetitions. Second, the transformation of individual particles (the players) into an accumulated whole (their collective parts). Finally, the notion of flowing in different directions, symbolized by different tempi. As to structure the album reminds me of Elliott Carter’s "Triple Duo," a work which also consists of three duos: two woodwind, two strings and two percussion (since the piano is a percussion instrument), each with their own repertoire of rhythms, tempos, intervals and musical ideas.

As a result of Niggenkemper’s concept, the band creates soundscapes in which it’s sometimes impossible to discern what sound is created by which instrument, the music representing individual pieces of junk mingling in the thick sludge of the whirlpool. In a piece like “Plastisphere” Niggenkemper also sets off dark noise against high pitches and single, shy prepared piano notes crash into spooky drone sounds. Melancholic clarinets flow over monotonous electronics. These parallel strands and fluid textures are reminiscent of György Ligeti’s “Atmospheres”, best known from Stanley Kubrick’s 2001 - A Space Odyssey soundtrack (of which Ligeti was actually unaware until he went to see the film).

It’s this diversity which makes Talking Trash such a fascinating album. A track like “Gyres Océaniques” is based on a repeated piano groove – a steady pulse supported by the bass clarinet – which ploughs through the piece, conjuring up the huge whirlpools. Zoubek and Risser show how they can think and play while improvising, juggling different musical notions. On the other hand, “Ideonella Sakaiensis" (a bacterium capable of degrading and assimilating plastic) is completely improvised, a piece which seems to drift apart, panting, moaning and gasping like a huge beast. In “Kinetic Islands“, the last track, improvising pianos circle around notated reed parts, before Badenhorst’s clarinet breaks out, taking the piece to an almost conciliatory end … but for those disturbing piano sounds.

Talking Trash is an exciting album from the interface of improvised jazz and contemporary classical music, Niggenkemper says he was indirectly influenced by people as different as Anthony Braxton, Karl-Heinz Stockhausen, Mauricio Kagel, Eliane Radigue or Giacinto Scelsi. It’s an album of excellent music which matures with each listen.

The album is on CD,  available from www.instantjazz.com and www.downtownmusicgallery.com.