Something Old, Something New (Part 2) 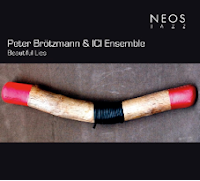 “Beauty is not beautiful, it is tragic” (Sean Scully)

As the name suggests, the International Composers and Improvisers Ensemble works with both written and improvised music. It was founded by Johanna and Christofer Varner in 1999 and consists of a pool of musicians who are drawn on for each performance. The Ensemble has collaborated with a variety of European and American musicians from different fields, including Vinko Globokar, Johannes Bauer, George Lewis, Evan Parker, Han Bennink, Joëlle Léandre and William Parker. Various sub-groups also meet on a regular basis which means the players have a keen understanding of musical relationships within the Ensemble.

Brötzmann has worked extensively in big groups: the Instant Composers Pool Orchestra, the Globe Unity Orchestra, his Chicago Tentet, and a recent Octet. I’ve written before about the various ways larger ensembles can be organised to avoid a musical pile-up, involving some form of planning. As is often the case with improvisation however, there is another way: no prior organisation at all. It’s risky, but can work with musicians sufficiently familiar with each other and sensitive to even the smallest shift. This is the route which Globe Unity and the Tentet eventually took – each sounding very different, reflecting their respective cast of characters – and according to Neos, it’s what we have in the two performances on this album.

Although nothing is worked out in advance the music doesn’t lack cohesion, it’s simply achieved in a different way, mainly through the evolution of smaller groupings and areas of focus, avoiding too many people crowding the picture – a chamber-like approach to improvisation with members of the Ensemble forming ad hoc combinations, producing a wide range of sounds and layering of ideas, textures and melodies. Much of the time the Ensemble doesn’t actually sound like a lot of people playing together and it’s only occasionally that we hear them in a recognisable tutti. Brötzmann is central (more accurately, downstage left), not as the dominant voice but as instigator.

‘Beauty Doesn’t Lie’ begins with cries and flutters on the horns, led by Brötzmann’s tárogató, whose rhythmic pattern is echoed and extrapolated across the Ensemble, the instruments providing just a few notes at a time to build an ever denser texture. Gradually, it thins leaving a jangle of electronics and Brötzmann begins one of his rubato dirges on tenor, building in tension and then dissipating into a dreamy passage with electronically enhanced piano chords and internal plucking. An agitated trombone solo is set against woodwind, and Brötzmann on clarinet, in a contrasting chorale. The trombone returns, this time accompanied by clunking on the piano, which is overwhelmed by a vast sine wave of sound passing between instruments, eventually joined by piano clusters and expanded trills from the horns, spurred on by Brötzmann’s gnarled saxophone blasts, driving the Ensemble to a cacophonous, Bacchian frenzy. A short piano interlude of quicksilver runs dissolves into chords and light tinkles underpinning Brötzmann’s ripe tenor and, as if in flashback, joined by a sleazy clarinet. Slowly, all the brass rise to end in a communal wail. Beautiful? If so, “a terrible beauty”.

In ‘Auge Des Betrachters’ (Eye of the Beholder) Brötzmann takes more of a back seat, and the Ensemble is mainly steered by pianist Martin Wolfrum, whose contributions throughout are lively and ingenious. There are great swathes of sound, often in the lower registers, producing shudders and shock waves, Brötzmann’s tenor growling like a wounded animal. Fragments of melodies materialise and are subsumed by thick layers, and from a scurrying insect kingdom of instruments we hear delicately constructed dialogues: piano, soprano saxophone and oboe, and with Brötzmann’s clarinet. The concert concludes as it began with Brötzmann on keening tárogató, rising above the crowd, rallying one last cry. It ends however, not with a bang, but a whimper.

The album is a dual layer SACD (Super Audio Compact Disc) which combines two channel CD – so it can be played on a CD player – and two channel and multi-channel DSD (Direct-Stream Digital), a form of hi-resolution audio. For the latter you’ll need an SACD player capable of handling the requisite channels (two or five) which I don’t own. I prefer to listen to DSD by way of audio files in two channels. Although Neos’ website indicates that a hi-res version of the album is available for download, at the time of writing this isn’t the case and therefore I listened to the album in two channel Red Book – good old CD. It sounded fine even without the enhanced bandwidth, but it would be a fascinating experience to hear the array of instruments in the newer format of multi-channel sound. I’d be interested if anyone’s done this, though unfortunately I imagine the overlap between surround sound aficionados and free jazz fans is relatively small.