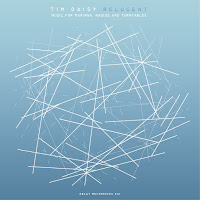 Last year Tim Daisy gathered up various radios, turntables, percussion instruments and kitchen utensils and hit the road.  These compositions are the result of working within the realm of random sounds and textures (radios, turntables) and conceptual ideas about time and space.  Sure, sometimes the passage he has chosen from a record is planned – but it can just as easily be a random grab, an educated guess about what is needed to augment the new sonic world in the moment of its birth.  The radio, of course, is far more of a crap shoot.  The marimba is the latest addition, percussive but also melodic in the most conventional sense.  It has become the center of this new music – but not as the staid old grandfather clinging to tradition.  It serves more as a glue that holds the carefully constructed collages together.  In fact, I'd say that the textural qualities of this music are every bit as important as its melodic ones –  probably more so.  Christian Marclay's turntable work, John Cage's Variations (check out that cover art!) and dadaist Kurt Schwitters are credited by Daisy as influential upon these works.  Something Daisy doesn't mention is the blues, for which these compositions might as well be a valentine.

So given all the high art background, the first imagery conjured up here is of a loose interpretation of Pharoah Sanders' “Thembi” coming from a humble jungle hut.  And dammit, that's as it should be!  Inclusiveness, randomness, the incorporation of the interruption – that's what life IS.  We can only benefit from variety in life, which here forms a shakedown dance line followed by a turntable downspeed drone into malarial hypnosis that is equal parts Ake Hodell and Moondog playing a balafon from Ghana.  Worst sentence ever, but you get the point.  The juxtapositions are all Daisy's.

It turns out that this music was not spliced together at any point.  There was no “cut-up” technique applied in the editing process.  I would have put good money down on the assumption that Mr. Daisy chopped off bits of various versions and inserted them into rearrangements post-recording, due to the fact that the incredible flights that sound like spontaneous creations HAD to have been from an early version – when the thing was fresh.  When it was still in the process of becoming.  Splice that into the finished piece.  Nope.  All live solo performances.  All, as the composer puts it “were recorded live in real time with three turntables, a marimba, and three radios.”  Unreal.

A full peaceful minute of radio static is followed by a three-note repeated pattern on “Naturalized,” before building into a high-speed chase for solo marimba. It's a Takemitsu film score gone car chase.  Prior to this was “Blue Rectangle,” which made this listener fully appreciate the idea of electronic static (and ticking sounds) as a solid background.  (The track sequencing is stellar.)

What follows “Naturalized” is a beautifully constructed aural collage called “Intermezzo,” bringing together all previously heard elements to form something new and indescribable.  Keep in mind the collage is happening in real time and has mostly been predetermined.  It is a magnificent piece.  “Rain Static” and “Tangent” follow, providing a subtle and ambient atmosphere in which melodies from marimba or recordings rise and fall in carefully measured intervals.  The disc closes with the sound of an electric fan on the verge of collapse accompanying a sleep-talking marimba's slumber.

This music is playfully serious and seriously inspired.  It is obsessed with sonic juxtaposition, yet it is highly melodic.  It wears its influences openly, yet it is refreshingly new.  Born of improvisations, shaped into compositions, Daisy has written pieces that are sturdy, finely crafted morsels of musical experiences that the listener will return to again and again.

See footage from Daisy's “On The Ground” tour here:

Get Relucent at a ridiculous discount here: