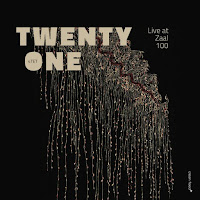 Located in Amsterdam, Zaal 100 is a venue that has hosted a number of notable figures in the world of improvisational music: John Dikeman and Luis Vicente, for instance, who appeared there in February of 2016 (along with George Hadow, Dirk Serries, and Martina Verhoeven) and later released an album documenting the performance. Well, Dikeman and Vicente had actually done a prior performance at Zaal 100, in September of 2015, with Wilbert de Joode on double bass and Onno Govaert on drums. On this newest release, we can hear that first performance in full. Govaert, Dikeman, and Vicente first met during the course of Jasper Stadhouders’ International Improv Ensemble. Finding they had “developed a strong rapport,” they decided to carry on their acquaintance, eventually choosing Wilbert de Joode to fill out their small ensemble. Of these four musicians, Vicente is the only one not currently residing in Amsterdam - considering most of his shows seem to happen in Portugal, it’s a treat to hear him with these Netherlands-based players. Why such a treat? Well, just listen to the sense of interplay they exhibit on Live at Zaal 100: it’s phenomenal, and shows them to be among the finest musicians in the world of contemporary free jazz.

“Red Moon” gets things off to a fine, albeit lurching, start - there’s a sense of haphazardness, of loosely-held-together structures that are always on the verge of collapsing. It’s this “looseness” that distinguishes the Twenty One 4tet as such a fine outfit; they may sound like they are about to disintegrate completely, but they never do.

The next piece, “Rising Tide,” begins with Wilbert de Joode’s delicately-plucked bass, followed by Govaert’s clattering percussion. When Luis Vicente comes in, it’s with a rather straightforward solo, but one that soon unspools itself, sending threads in every direction. That’s one of the joys of listening to him play: he’s got an undeniable ear for melody, but he’s also not afraid to draw all of the primal physicality out of his horn - sometimes he sputters, sometimes he spits out lines with acerbic intensity, but he always keeps your attention. The same can be said for Dikeman. His solos are, at times, downright harrowing - his playing calls to mind Albert Ayler, tossing tortured warbles, dense multiphonics, and screeches into a boiling cauldron. Likewise, the rhythm section doesn’t disappoint. Onno Govaert is a dexterous and acrobatic drummer, moving from taps to thumps to veritable bombardments, all without sacrificing the elasticity that lends his playing such an unpredictable, natural quality - hearing him construct his patterns is akin to watching a master tailor make a garment, with complex filaments weaving in-and-out of the compositions. Wilbert de Joode is the Gary Peacock to Dikeman’s Ayler, shifting easily from arco to pizzicato whenever it suits him, and producing rotund, dense lines that positively pulse through your speakers.

The final piece, “Vesuvius,” is the longest and most fiery one. Here, Dikeman drops the vibrato for an exuberant, impassioned style of playing that more accurately calls to mind Pharoah Sanders. While the Twenty One 4tet aren’t explicitly playing “spiritual jazz,” there is a core of religious fervor buried in these tracks - each player seems to be wrapped up in their own fever-dream, their own torrid world of searing visions and prophetical howls. Miraculously, though, they manage to reach across the gaps and truly connectwith one another, thus realizing one of the ideals of free jazz: creative expression that simultaneously marks out the boundaries between players (each player, after all, has their own unique style), and obliterating those boundaries completely. Perhaps that’s the real meaning behind the titles here - “Red Moon,” “Rising Tide,” “Undertow,” and “Vesuvius” - titles that imply submersion and annihilation. It’s in this same destruction, however, that the Twenty One 4tet find the “spiritual unity” referenced by Albert more than fifty years ago.