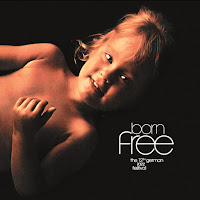 It was during my reading of Trevor Barre's book on the history of free jazz in London that I first heard of Born Free - a three LP release documenting the 12th German jazz festival in Frankfurt in 1970. The festival’s program was nearly all free jazz and was described by Barre as a milestone in his journey toward the free and avantgarde. Of course I needed to know more, but trolling about the Internet only revealed that the record was a true rarity.

Then, magically, along comes this expansive 9 CD box set with over 10 hours of music, essentially all of the music recorded at the festival. This is a massive set of music that comes in a heavy duty box, sporting the original cover, with the CDs mounted on extremely sturdy cardboard inserts. Included is a 32 page book mostly with pictures and the original press clippings (in German). Popping the first CD off the mount and into the stereo, the quality of the music is immediately obvious.

The festival big band that starts the show and the following tracks by the Dave Pike Set are fantastic. The big band features trumpeter Manfred Schoof, trombonist Albert Mangelsdorff, and guitarist Volker Kriegel, among many others. If you are familiar with German musicians, these names probably come as no surprise. The group's spirited arrangements give way to big-band free playing, and by track three, you get a full taste of the delicious mayhem found in the precarious balance of freedom and structure. Vibraphonist Pike's group, also featuring Kriegel, is like a European echo of Gary Burton's work at the cusp of the 70s.

The following disc captures groups led by Mangelsdorff and another huge name in German jazz, keyboardist Wolfgang Dauner. The trombonist's quartet plays an exciting free set that sounds as fresh today as it did 46 years ago. Dauner's group with trombonist Peter Herbolzheimer and woodwindist Gerd Dudek offers a rather swinging affair, and features the early synthesizer the clavinet, tempered by the ever sumptuous ring modulator.

Discs 3 - 6 contain some excellent performances by both better and lesser known musicians. One highlight is the set by Phil Woods and his European Rhythm Machine. The alto player's band consisted of bassist Henri Texier, drummer Daniel Humair and pianist Gordon Beck. Woods, though known for more straight ahead playing at the time, was experimenting with free jazz and fusion, and to my ears, with great musical success. A nice surprise is some of the lesser known names like the Frankfurter Trio für Improvisation - just bass, clarinet, and flute delivering a light and accessible, heavily improvised set, and "Just Music", who are the opposite - a sextet whose dark tones flow from the strings and agitated lines tumble from the horns. The Free Jazz Group Wiesbaden comes out swinging hard on disc 6 with a fiery performance mixed with dense textural playing. The group Limbus closes out the disc offering some quieter moments with some prototypical world music moments. All are great to (re)discover after so many years.

Disc 7 finds us in the company of the heavy weights again: saxophonist Peter Brotzmann with Evan Parker and Willem Breuker on reeds, Malcolm Griffiths and Paul Rutherford on trombone, Derek Bailey on guitar, and Han Bennink on percussion. They perform 'Fuck Der Boere', which was released in 2001 by Atavistic as tracks on the album of the same name. It's a classic performance and it is interesting to hear it in the context of all the other groups. Still very much timeless: the distorted guitar lines, the vibrant brass work, and of course the leaders own patented sound, make it a standout. The closing tracks from Manfred Schoof's trio appears at the end of the disc, and the lean bass, drum and trumpet trio provides a nice contrast to the previous track. Schoof's playing is as poignant as ever - cue up about 10 minutes through the track for some thrilling cadenzas.

CD8 is another standout, it features a set by an early incarnation of the Alexander Von Schlippenbach Trio with Michel Pilz on saxophone and flute and Paul Lovens on drums. The 27 minute track kicks off with the pianist and drummer in duet until the saxophone appears with a meteoric rise to places beyond. Next is drummer Pierre Favre's group, with saxophonist Trevor Watts, guitarist/trumpeter Jürg Grau and pianist Irene Schweizer, and it’s another treat. A Coltrane-like arc from Watts kicks things off, but soon they move into strong pulse driven free improvisation with some heavy guitar work! Closing out the CD is the quartet of the legendary Kuhn brothers, Joachim and Rolf, who play an acoustic set with a particular anthem like feel.

Finally, CD9 is the festival closer and it features a long track that features saxophonist Gunter Hampel augmented by the wordless vocals of Jeanne Lee. This set takes a while to really kick into gear, emphasis is placed on the vocals and sound textures, but around the mid-way point, the sound of the group seems to expand, though a cohesive piece never emerges. The follow up, and closing set, is where we find the European musicians joining the Art Ensemble Of Chicago. The track is entitled "Getting to Know you All" per the album notes, however, Lester Bowie, in his rambling introduction, explains that original title - after meeting and playing with the Germans, and feeling the vibe of the people - he extended the composition and called it  "Germany Unite" - a political statement delivered by an unbelievable roster:

Billed as the European Free Jazz Orchestra Of The Art Ensemble Of Chicago – the set is a slow boil of emotion and melody. The intensity ebbs and flows, as full ensemble free playing section leads to an almost silent passage of micro-tones, then to an extended vocal section. Though the wordless vocals do not sit so well with me, the song is a powerful end to the concert and worth a close listen.


This is a treasure trove of music, at once historic and at the same time sounding very much alive! While bits and pieces and versions of the festival have been floating around for years - officially and otherwise - it's nice to have this archival box set, if you can find it.

Authors note: around the time of writing this review, at a small but deeply stocked record store on Boxhagener Platz in Berlin, a copy of the original LP hung tantalizing out of reach. I dared not ask the price.

I'd like to buy that but how's the box. In pictures it seems that discs are in great danger to get scratches. In thet price it would be a big disappointment.

The discs are safely mounted, playing side down, no more at risk than in a standard CD jewel case.