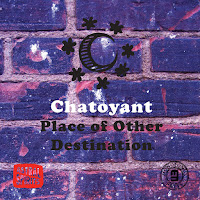 From Detroit comes Chatoyant, an improvising quartet assembled from well-known local musicians Matthew Smith of Outrageous Cherry and The Volebeats on guitar; Jim Baljo, who plays guitar with the noise band Wolf Eyes, on drums; Joel Peterson, whose venue Trinosophes has hosted a range of stellar acts, on Fender Rhodes and double bass; and Marko Novachoff, who has played with LaMonte Young and Frank Pahl, on winds. In March the group played the Big Ears Festival, and in May, they released their debut cassette on Astral Spirits.

The two side-long jams that make up Place of Other Destination are sometimes broody and lumbering, sometimes manic and frenzied, developing in vague patterns of rise and fall. Thanks in part to the live character of the recording—there’s a distant quality, as if we’re hearing instruments played underwater, each voice struggling for distinction—it’s Smith’s guitar and Baljo’s percussion that tend to shape the sound here, at least in its broad strokes. So it’s easy to appreciate Smith’s darkly intense picking and hectic strumming (I’m reminded of some of the playing on Peter Walker’s Long Lost Tapes 1970), or Baljo’s energy on the toms and his judiciousness in when to lay down a beat. Though Peterson’s and Novachoff’s contributions are harder won, for me, they’re no less important. There’s a quiet passage halfway through side A where the group achieve a kind of equilibrium, keyboards and winds weaving hauntingly through a rotten netting of guitar and drums. Side B, “The Secret No More,” with some nice arco work from Peterson early on and impressive blowing from Novachoff later, may be even better for my money than its counterpart—perhaps a tad less exploratory and a tad more surefooted, up to and including the album’s beautifully mellow, almost tender final moments.

This is Chatoyant's second release. The first was Psychic Heiroglyphs, an LP on Detroit Cosmic Music....