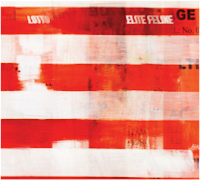 Elite Feline is the second album by Lotto – a trio consisting of Łukasz Rychlicki (guitar), Mike Majkowski (bass), and Paweł Szpura (drums). Two years ago they released Ask the Dust, an excellent album at the interface of minimalism, improvised rock and new classical music. Compared to the debut, their new CD is rather an excursion into trance creating a ritualistic, meditative and otherworldly atmosphere.

“We spent a lot of time during our rehearsals just learning how to be patient in order to achieve the desired trance and what you may call a unity of sound“, says Łukasz Rychlicki. “This time we were more focused when entering the studio, having the basic structures and motifs prepared“.

As a result, the album presents two compositions, “Rope“ and “Pointing to a Marvel“, each based on powerful two-chord-loops mainly concentrating on resonance and sound. Only the drums set different accents here and there, but very cautiously. However, minimal changes were added during post production. This has a disturbing and fascinating effect: the seeming stasis of the sound encourages the listener to zero in on seemingly circumstantial details, so that the smallest changes have the force of seismic shocks and something as simple as the appearance of a new instrument can send chills up the spine.

While “Rope“ mainly works with delays, sparsely added noises (like rattles, vibrations and buzzes) or sounds effects like dubs, echoes and subtle distortions, the aforementioned phenomenon becomes most evident in “Pointing to a Marvel“, a track that flows along quietly and puts the listener into a daydreaming state when suddenly - after eight minutes - a harmonica pops up from nowhere which reminds of Ennio Morricone’s “Man with a Harmonica“ from One Upon a Time in the West.

If one opens up to this approach, one could really imagine new territories with hardly any limits. As for Lotto, their idea of trance may be best understood as a way to change the mind and how we listen to music. They provide a different set of emotional resources, something that resonates deeply within the subconscious. It is meant to be relaxing, intuitive and inspiring.

Elite Feline displays a certain hypnotic fascination if you listen to it very closely and indeed very loud. Then it unfolds its full potential.

Elite Feline is available on CD and as a download.

You can listen here:

This is a really cool listen. A fairly obvious touchpoint that might be helpful to orient readers is Majkowski's fellow groove-oriented countrymen: The Necks.

The Necks are Australian - not Polish!