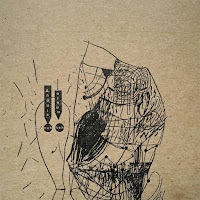 The last time we heard from the masterful Snakeoil, it was on 2015’s You’ve Been Watching Me, a widely-acclaimed recording that perfectly captured the sizzling, enigmatic energy of Berne’s quartet. Anguis Oleum, their newest release, was originally paired with Berne and artist Steve Byram’s limited-edition collection of drawings and photographs, Spare. Now, it’s available for download on the Snakeoil Bandcamp page, and everyone can get a taste of what this group sounds like when it loosens the reins a bit. Anguis Oleum is not actually a collection of all-new compositions, but a live recording - it contains a couple of pieces that have previously appeared within Snakeoil’s studio output, as well as some unreleased material. As on You’ve Been Watching Me, Snakeoil consists of Berne on alto saxophone, Oscar Noriega on clarinet and bass clarinet, Matt Mitchell on piano, and Ches Smith on percussion. Guitarist Ryan Ferreira is nowhere to be found, unfortunately, but the rest of the players more than makeup for his absence.

The opening composition, “Deadbeat Beyonce,” is one of those that was previously unrecorded. It opens with a lovely run by Matt Mitchell, notes cascading over one another and gradually increasing in both intensity and complexity. After four minutes, the reeds join in with intricate figures that are instantly recognizable as coming from Berne’s compositional toolkit - minor-key, tense, and suggestive of a convoluted system of alleys in a bleak metropolis. As it unfolds, “Deadbeat Beyonce” gives way to a wild fervor; Berne is practically shooting flames from his alto, and Ches Smith pounds with an unbridled force that is particularly striking when compared to the restraint he exhibits at the beginning of the track. Even in their fiercest moments, however, the members of Snakeoil maintain a certain rigidity, a disciplined single-mindedness. The passage through the alleys may be winding, with sudden shifts and unexplained detours, but the destination is clear. At one point, it seems that the piece will close with Mitchell’s twinkling keys and Noriega’s wounded bird-calls, but that’s just a misdirect: the group come together in one last eruption, one that swells, sinks, then swells again, eventually coming to an abrupt close.

“Spare Parts” moves at a slower pace than “Deadbeat Beyonce,” taking its time to develop and stretch out. In the composition’s opening minutes, Ches Smith is on vibraphone, which is admittedly the perfect instrument to accompany the noir-ish sound-worlds that Berne constructs. As Smith taps the vibes and Noriega moves through a series of labyrinthine shapes, one can’t help but re-imagine that shadowy metropolis, steam rising from the gutters and streets perpetually soaked in rain. After some time, Smith is back on the drums, Mitchell comes in with his expressive, dramatic chord-changes, and Berne is blowing with his icy fire - a sound that is simultaneously fervent and frigid, searing and cool. “Lamé 3” is a shorter piece, but it somehow condenses the cinematic scope of the longer compositions into eight minutes - there are twists, turns, unfettered peaks, and trembling moments of tension. Also, some of the players here hit their stride: at one point, Ches Smith abandons all pretensions towards restraint and just pummels his kit. Likewise, Berne engages in a short stretch of insanity that was somewhat surprising at first; instead of that cool reservation that he typically exhibits, he practically screams with his alto saxophone, sending the track into the stratosphere.

“Oc - Dc” is the final piece here, as well as being the longest. Here, the group shows off their marvelous sense of interplay, with an almost lighthearted exchange of notes - melodies that bounce off of each other, diffract, and inexplicably change shapes as the composition moves forward. That lightheartedness is refreshing, especially in the context of Snakeoil; with this group, Berne has primarily delved into tones and textures that are on the “bleaker” side of things, and the pieces can occasionally feel airless. That airlessness is not necessarily a bad thing - in fact, it might be required in order to convey the atmosphere that the group wants us to hear. Thus, despite the fact that many Snakeoil compositions seem to work with “one note” (serpentine, minor-key, filmic), that note is played exceedingly well, and Snakeoil scratch a musical itch that no other groups can. Anguis Oleum is proof that, among Tim Berne’s manifold projects, Snakeoil is the most consistent and the most fully-developed. Now we wait for the studio follow-up to You’ve Been Watching Me!