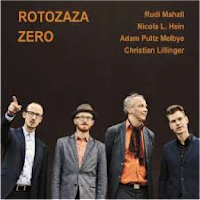 As to tactics modern football (for Americans: I’m talking about soccer) has changed dramatically in the last 15 years. The teams of master coaches like Pep Guardiola, Antonio Conte and Carlo Ancelotti are able to change their strategies within seconds, just as required by the situation. A strong unit and positional play are perhaps the most important factors in the success and beautiful football of these teams, Barcelona, Real Madrid and Bayern Munich are trained to be positionally intelligent and would consistently occupy the correct spaces on the pitch at all times, in turn allowing them to move the ball quickly and emphasize the abilities of players.

Rotozaza, named after a device to destroy bottles by Swiss artist Jean Tinguely, is a quartet consisting of German bass clarinetist Rudi Mahall (of Alexander von Schlippenbach’s Monk’s Casino fame, among others) and three members of the new German/Danish guard: Nicola L. Hein on guitar, Adam Pultz Melbye on bass and Hyperactive Kid’s Christian Lillinger. Zero is their first album and contains a bundle of seven freely improvised pieces.

That modern football and free jazz are sometimes very much alike can be seen on their debut, especially on two tracks. “Anwendung herzstärkender Mittel“ (German for “application of medicine which consolidates the heart“) builds a structure with scintillating guitar and bass tremolos and rolling drums over which the bass clarinet can soar with a squeaking voice. Mahall’s sound is pleasantly different to what one might expect. Notwithstanding, Hein is the man who leads the band in a different direction with a lot of guitar distortion. A bowed bass, reluctant drums, and a lyrical bass clarinet close the track. “Engel in Schutzanzügen“ (German for “angels in protective gear“) is the longest and best piece of the album and the best example of how they shift their improvisations. It begins like an angular ballad, bass and bass clarinet contribute long and extensive notes, Lillinger’s brushes support the tension created. When Hein creeps into the piece with shy feedbacks, they build a wall of sound which is both airy and transparent. The change occurs slightly after six minutes when Hein lets dotted single notes ring, reminiscent of Derek Bailey. Lillinger responds with gongs and Mahall produces angry runs. Here the piece is at the verge of complete disintegration. However, this happens very organically. Often one instrument holds the piece together (and it’s not necessarily one of the rhythm section), sometimes it’s only a certain recurring element like a guitar feedback or a bowed bass line.

In the short liner notes the musicians mention that sound experimentation is a very important element in their music, it’s used as a central improvising aspect, for example in “Körper aus Vakuum Masse“ (which means “body of a mass of vacuum“), where Mahall jumps from very low to extremely high registers, competing with the guitar noise.

The purpose of a clever football strategy is to beat the other team, one purpose in free jazz is to surprise the listener. Zero succeeds in doing this, it’s a very tight album. Like good football teams Rotozaza are a great unit with very good individual players. A promising debut.