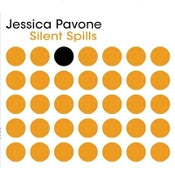 Looking at the track listing of Silent Spills, violist Jessica Pavone’s latest solo release, you might think something’s missing. Five tracks totaling less than twenty-five minutes? But a single listen reveals the album as a complete musical statement, one executed at such a level of intention and intimacy that it would hardly be sustainable for much longer— for neither performer nor audience. Want more? Better play it again.

Fans of Pavone’s 2015 solo album, Knuckle Under, will find themselves in familiar territory here—not just both albums’ brevity, but their penchant for minimalism and repetition, their meditatively drawn-out tones, their judiciously employed effects, their rustic folk leanings.

Silent Spills begins with an exercise in entropy. Two steadily oscillating notes establish a sense of stability and order, Pavone sawing with concentration, and the music develops with a simple logic as a new pair of notes is introduced in predictable alternation with the original two. But almost imperceptibly Pavone’s playing accelerates until the sound begins to splinter with distortion, eventually breaking the whole thing down. The piece gathers itself back together again with another oscillation, this time between two sets of distorted pulses, as if we were hearing the initial two notes slowed way down, or through some type of auditory microscope.

“Shed the Themes of Broken Records” colors the album’s introspection with a touch of melancholy. In the first part of the track Pavone makes excellent use of silence, razoring a note or two into the air and letting the sound decay. Later come rich folk-tinged drones, played with feeling and almost mistakable for harmonica. Actual breath—not just metaphorical or simulated—plays a part in the third track, “Dawn to Dark,” where Pavone sings in unison with stop-start pizzicato: “far from the sea / not near the sky / the sun gets weaker / and the earth dies…” Yet the song’s delicate humanness—built of fingers and a small voice—then gives way to the mechanical, with relatively harsh high-pitched distortion that’s carried through into “Ugly Story,” the shortest and humblest of the five tracks.

“Seeded and Seated” closes Silent Spills on a more buoyant note, combining and recapitulating Pavone’s various approaches throughout the record, from the opening pizzicato arpeggios and strumming to the serrated drones that overtake them to the silence that utterly blooms between the album’s final notes.
Paul on Wednesday, October 26, 2016
Share