Peter Kuhn: In With the Old, In With The New

It has all the makings of biopic: Peter Kuhn, a promising young musician in the late 1970s living in New York City and taking part in the vibrant downtown loft scene - friends and collaborators with Billy Bang, Lester Bowie, Frank Lowe, William Parker and many others - plunges into the depths of addiction...

"The loft I had on Prince Street was a dump. No insulation, broken windows, and on a block that was entirely burned out except for my building and the corner bodega" writes Kuhn in the liner notes to No Coming, No Going.

Speaking frankly about his descent into addiction and the friendships that still mean a lot to him, Kuhn writes "he [Frank Lowe] came over one day when I strung out like a dog on heroin and pretty sucked up from not eating. All my money went to drugs; food was not an essential. Frank pulled me up and schooled me that I have to take care of myself for the music and any longevity."

Before moving back to the west coast in '81, Kuhn cut the ironically titled but deeply moving Livin' Right. After having some additional success in California, touring, and recording for Hat Hut and Soul Note, he hit rock bottom, and started working on getting clean, but in the recovery process dropping out of the music scene.

Thirty years later, through hard work, a turn to Buddhism, and a desire to reconnect with music, Kuhn has reemerged a prolific player, picking up virtually where he left off. 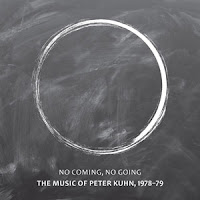 The tandem melody by clarinet and trumpet that kickstarts the album has the feel of an Ornette Coleman theme, delivered in dry urgent tones, though it soon gives way to a long drum passage. The second track is a half hour long and seems to package several tracks of the original release as one. 'Manteca, Long Gone, Axisential' begins with 'Manteca' (not the Dizzy Gillespie tune), which sees a great deal collective soloing over a driving pulse. The intensity grows throughout the track and Kuhn's clarinet work glistens throughout. What I assume is 'Long Gone' is a captivatingly slow and brooding affair, and 'Axistential' picks the pace back up and features an intense trumpet solo. Musical ideas that appear here resurface in some of Kuhn's recent work, revealing a certain vision and maturity already.

The second disc is a woodwinds and drums duo with Denis Charles recorded at a concert in Worcester, Massachusetts during the fall of 1979. This is a sick show in the best way possible. Charles is an unrelenting task master - but a compassionate one - the pulse and textures he plays act as both support and lead. Kuhn's work is fiery right from the start. A cascading melody starts 'Stigma,' Kuhn is locked in with Charles who is following the melody with his rhythm, but then the clarinetist breaks free into a wide-ranging solo that covers every inch of the clarinet. A solo passage during the final third of the passage is eviscerating and beautiful in its starkness and precision. With little place to hide, the whole concert offers such moments of pure, earnest musicianship.

Though recorded thirty eight years ago, the music is still fresh and exciting - except for maybe the squeeky toys on Livin' Right that have aged a little less well than the rest of the album (some ideas are definitely of the time). There is a lot to recommend on these two discs and we owe No Business a big thank you for releasing this retrospective. 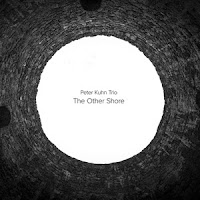 A big leap forward to 2016 and a trio recording, also on No Business, featuring Kuhn with a trio consisting of Kyle Motl on bass and Nathan Hubbard on drums.

Happily, after 30 years since dropping out of music, The Other Shore is a return to form and over the decades, the emotional quality of Kuhn's music has deepened. Whereas on the duo recording with Charles he charged out of the gate, here, the trio takes its time to build. Not to say that there is a wasted moment during the opening 'Is Love Enough' - every second is festooned with fresh ideas. Kuhn's tone on the bass clarinet is sumptuous and the unhurried improvised melody that he starts with is as composed as one he could have worked on for days.

The track 'Causes and Conditions' is a stand out - it begins with some tonal smears and short tense phrases from Kuhn on the clarinet. A rattle from the percussion and coarse bass accents undergird the saxophonist, and as they gain momentum, the ferocity picks up along with the velocity. The title track delivers measured exuberance, and a long 'everybody solos/nobody solos' passage in the middle highlights the subtle interactions that glues this trio together.

'Not Two' has the most decidedly free-form approach on the album, with the trio extending the technique of the song, while staying relatively inside the lines with their instruments. The impact is gripping as the bass clarinet is stretched across the tempo-less time, while bowed bass lines fill in the rest with crosshatch.

The 'Other Shore' quickly and insidiously infiltrated my playlist and is quickly becoming a favorite of the year. 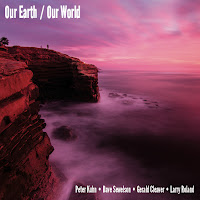 The Clemente Soto Vélez Cultural Center located in the Lower East Side was founded in the early 1990s when the Lower East Side was still far from being yet another trendy hot spot for Manhattan real estate. The building is a lovely Dutch Neo-Gothic block-long former school building and is a much needed refuge for the artists being displaced by high rents and endlessly numbing luxury condos. On an upper floor of the building, Arts for Arts, the non-profit responsible for coordinating the Vision Festival, and much more, runs occasional performance series like the one that this recording was made.

In April 2015, Peter Kuhn and an ad-hoc group comprised of drummer Gerald Cleaver, saxophonist Dave Sewelson and bassist Larry Roland, hit the floor with a screaming set of improvised music that re-united Kuhn and Sewelson (who's association goes back to when Kuhn was walking these very different streets in the late 70s) and introduced them to Cleaver and Roland.

The concert recording starts off with a bang - like the aforementioned duo from '79 - however, this time it's Kuhn and Cleaver who engage in a high-speed chase, with interjections from Roland and Sewelson. After an extended drum led section, Sewelson comes in with a distinctively melodic solo that turns in parts to Ayler-esque outpourings ...  and when both of the woodwinds team up, an amazing squall ensues. Midway through 'Our World,' a calamitous woodwind solo reaches a feverish pitch and extended drum, bass, and baritone sax passage follows, casting a spell over the track.

Though they started off in fiery dialog, where they end up is somewhere completely different. Roland starts the track with a long solo bass introduction. After a stretch of searching and re-calibrating the group settled into a satisfyingly yet obtuse pocket. The two winds stretch notes and dig deep and create something special.

The No Business (re)release is a welcome (re)introduction to Kuhn, which captures an exciting start to a too quickly curtailed musical career, however, the music of The Other Shore and Our Earth / Our World finds him making up for lost time with real purpose.