The Lonely Improviser: a Week of Solo Albums

Playing alone might be the most difficult option in improvisation. Even Derek Bailey, one of the great solo improvisors, said that though there were advantages, it lacked the more essential and magical side to improvisation: an intuitive and telepathic exchange, which can only be enjoyed in a group context.

At their worst, a solo performance can amount to not much more than a catalogue of personal clichés and crowd pleasing moments. A soloist can also lose any proper critical distance, missing the point to finish, or move on, sounding tedious and self-indulgent. On the other hand, playing alone can be a useful means of analysing and assessing style and vocabulary, putting them under the microscope. Another important feature is that good solo improvisations often have a plan, a notion of where things should go. Some good examples of the genre produced recently are Pascal Niggenkemper’s Look With Thine Ears, Peter Brötzmann’s Münster Bern, Eve Risser’s Des Pas Sur La Neige, Nate Wooley’s (9) Syllables, Matana Robert's Always,  and Paal Nilssen-Love’s Cut and Bleed.

This week we‘ll be reviewing a bunch of recent solo albums, some by well-known artists, others lesser known but equally deserving of attention. 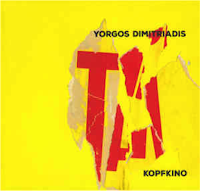 Thessaloniki-born percussionist Yorgos Dimitriadis is one of the most prolific members of Berlin’s Echtzeit network, where he has played with Frank Paul Schubert and Mike Majkowski (in the excellent Fabric Trio), Miles Perkin and Tom Arthurs (as Glue). Kopfkino (a German expression for “film in your head“) is his first solo effort. Listening to it, you might be surprised this is a live recording with barely any electronics. Dimitriadis plays a very ordinary, small drum kit, in a conventional way, using sticks, mallets and brushes, but only with his right hand. In his left is a microphone which he uses to generate sounds reminiscent of large singing bowls - aural landscapes that rustle, fizzle and hiss. Dimitriadis alternates between introspective passages, in which his music displays wide spaces, and hectic video game sounds, where the music pants and moves forward in a jerky and twitchy manner. An unusual approach, he keeps his performance short and tense.

Black Pus, Brian Chippendale’s drum project (but with the addition of electronics and voice) came to mind when I first listened to Kopfkino, In comparison, this album is more subtle and relaxed, less energetic.

Some listeners might be skeptical when it comes to drum solos. This album could prove them wrong. Kopfkino is available on CD.

Steve Swell - The Loneliness of the Long-Distance Improviser (Swell Records, 2015) **** 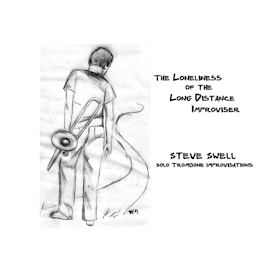 While Yorgos Dimitriadis is a new name to many, Steve Swell needs no introduction, one of the leading trombonists in free jazz today (along with George Lewis and Jeb Bishop). His trio with Paal Nilssen-Love and Peter Brötzmann is superb, as is his quintet on Soul Travellers (with Jemeel Moondoc, Dave Burrell, Gerald Cleaver and William Parker). Interestingly, The Loneliness of the Long-Distance Improviser is the first solo album in the long career of the 61-year-old. (The title, taken from Alan Sillitoe‘ book The Loneliness of the Long-Distance Runner, might be a nod to trombonist Paul Rutherford’s solo classic The Gentle Harm of the Bourgeoisie, whose title references Luis Buñuel’s film, The Discreet Charm of the Bourgeoisie.)

In brief: a very good album. Over the fifteen pieces you can hear intermingling voices from the long history of jazz: musicians like Roswell Rudd and Rutherford. Swell’s playing is wide-ranging and articulate, an effortless blend of timbres, techniques and means of construction.

As befits the trombone, there are blues roots together with more modern work. Jumping from circular breathing (“Bubbling Quantum Novas“) to staccato salvos (“Sequences“), alienated sounds (“Cogitation“) to beautiful lines (“For Kenneth Patchen“), Swell murmurs, pants, sneezes and grumbles. My favorites are the more conventional “Tongue Memory“ and “Blue Spirit“, the last two tracks on the album, swinging numbers, as if Swell wants to give good old New Orleans a more contemporary feel. Feel free to click your fingers.

The Loneliness of the Long-Distance Improviser is available on CD.

You can get it from downtownmusicgallery.com.
Paul on Monday, October 24, 2016
Share