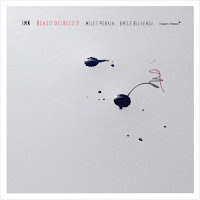 French pianist Benoît Delbecq has been praised on this blog before, and rightly so. Not that he is an icon of free jazz or free music. No, he has his own style, maybe even his own genre. Out of the jazz and classical heritage, and with more tribal influences, he developed the piano into an instrument that explicitly adds percussion as one of its sonic ingredients, playing with muted strings, or with objects on the strings. Also that is by itself nothing unusual, but Delbecq integrates all this into relatively accessible music.

The trio further consists of Miles Perkin on bass and Emile Biayenda on drums. The former replaces the late Jean-Jacques Avenel who passed away two years ago, and the latter, hailing from Congo, is also new to the trio. And they are fully in line with Delbecq's approach. The ten tracks are like little miniatures of structured and composed improvisations, all girating around rhythmic inventiveness and pulse, further enriched by the pianist's natural lyricism.

Without becoming really minimalist in nature, the trio still avoid anything that is expansive or sweeping in nature. They really do their utmost to stick to the absolute essence of each piece, adding ear-candy on the way, but without any superfluous embellishments. The whole has a lightness of touch, a joyful playfulness that is rare to find. It has no specific pretense, which makes it even more attractive.