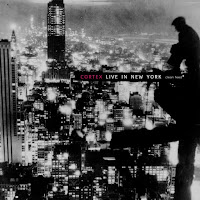 The magic of Cortex lies in their ability to effortlessly straddle the many, many lines that have been arbitrarily drawn in the world of jazz: the lines between “in” and “out,” between modal organization and “freedom,” between rhythm and noise. In many ways, it’s the latter division that they most frequently muddy up or outright remove. Bassist Ola Høyer and drummer Gard Nilssen are, unsurprisingly, the keys to the group’s rhythmic dexterity. Høyer is an unfailingly melodic and steadfast player, always acting as the tonal eye to the swirling, cyclonic explorations of cornetist Thomas Johansson and saxophonist Kristoffer Alberts. Likewise, drummer Gard Nilssen (whose group Acoustic Unity produced last year’s excellent Firehouse, reviewed here), with his knotty allusions to West African percussion styles, provides an eminently tuneful foundation.

The opening track, “Higgs,” doesn’t disappoint. The head of the piece, exuberantly played by Johansson and Alberts, brims with exoticism. Meanwhile, Nilssen’s drums are an unabating stream, constantly pushing things forward. Despite his fluidity as a percussionist, Nilssen is never predictable - his rhythms shift, shake, and occasionally erupt into your consciousness. Høyer, on the other hand, opts for unwavering momentum; his bass-lines roil beneath the surface, not making themselves too conspicuous, but instead acting as a check on Nilssen’s more unruly attacks. After a second track, “Fall,” which mirrors the first in both structure and melody, the group launches into “Ghost March / Ahead,” a 20-minute piece that displays Cortex at the height of their abilities. After a brief solo from Høyer and an introduction of the main melody, Johansson and Alberts pull out all the stops, so to speak, playing with a kind of subdued abandon - caustic rasps, wails, and (for Alberts) dizzying flights into the altissimo register. These bold movements from melody to murky, clamorous noise-making are what make Cortex so exciting to listen to - as I mentioned before, the distinctions between “in” and “out” get obliterated, and you’re left with compositions that manage to be odd, idiosyncratic, and downright catchy, often at the same time.
Paul on Wednesday, November 09, 2016
Share