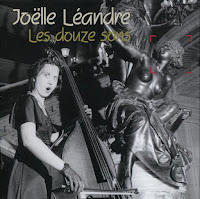 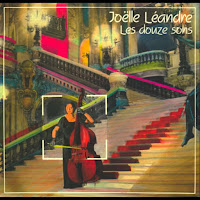 Although the album cover is of Léandre in ball gown on the Grand staircase of the Palais Garnier (Paris Opera) the recording was made during the four days of Carte Noir a Joëlle Léandre, held in June 1983 across the Seine at the more humble Left Bank location of Théâtre Dunois, a former coach inn which since 1977 had been a sort of laboratory for drama, dance and improvised music. One of Léandre’s earliest albums – though she’d been playing such music for a number of years, mainly outside France in America and Germany – she cites it as one of her most important discs. The title (The Twelve Sounds) is a reference to musical scope and intent rather than dodecaphony, an ambition that can be heard throughout the album, prescient of her music-making in the following years, and witnesses the renewing and forging of relationships she’d continue to explore, and at greater length. There are twelve pieces on the album, each different, but it suffers from a feeling that too many are mere appetisers: three last less than a minute and two just over – more substantial dishes though less varied and fewer in number, would have made greater musical sense.
Looking back, the outlook and personality of John Cage, especially as found in his writings, were possibly the most signal influence on Léandre, emancipating her imagination by charging the everyday with aesthetic significance: “He turned life itself into a form of poetry”. For this reason, it would be misleading to think of her as having a particular style or role within music. Her playing springs from something more basic, inspiration through the animation of an object – the acoustic and physical properties of the double-bass itself: vibrating strings and their harmonics resonating in a wooden chamber; how the bass is plucked, bowed, scraped and knocked; even the posture the body is forced to adopt. Paradoxically, although Léandre had a rigorous formal training, and her playing is rooted in the sonorities of the instrument, it helps to forget everything you know about the double-bass and its history. Our natural tendency to categorise and reference other music in order to make sense of what’s going on actually works against a sympathetic appreciation of her work and often, even advanced notions of musical coherence have no real application.  There’s no avoiding the particularity of her sound, something which is nothing other than itself, and yet at the same time thinking in more abstract terms can actually make it easier to listen: events can have no significance beyond the moment – her desire to excavate and elaborate, before moving on – but what we hear in her duos and trios is the mutual and sometimes disjunctive exploration of shapes, surfaces, configurations and movement. Like Léandre and her colleagues, we have to put our imaginations into play: “The art of improvisation is not improvised. It’s practised through listening.”
There are two duos with fellow bassist Barre Phillips: ‘Basses Profondes’ and ‘Grand Duo Concertant’, studies in the sonorities of the lower registers (“equivalent to the colour black”) with some impassioned bowing from Léandre. ‘Seriozo (pour Cordes et Trombone)’ adds George Lewis on the latter, though initially it’s barely recognisable as such, before he rises above the bass arpeggios and plays a quasi-lament.
The guitarist Derek Bailey, whom Léandre first met when he invited her to play with him during a Company Week in New York, was also an important figure in cementing her views on improvisation, though they never discussed music, just played. Here, they’re joined by Ernst Reyseger on cello for a brief blur of arco and chopped chords, ending in a pizzicato flurry. (Léandre and Bailey’s subsequent, No Waiting (Potlatch, 1998) is recommended).
There’s a comic air to much of what goes on. Of the four pieces from the trio of Léandre, Annick Nozati (vocals), and Irène Schweizer (piano) the first is a cabaret intro and the second a parody of the Sprechstimme from Schönberg’s Pierrot Lunaire.  With its virtuoso vocals and surreal twists, ‘Les Trois Dames’ is a forerunner of Les Diaboliques. In ‘Sonate Brève Échappée’ there’s a cartoonish gait on bass turned into a perpetuum mobile by Schweizer and evolving onto a free for all, from which Léandre recovers with syncopated pants. ‘Ballade de Chien’ features a contribution from Miss Biscotte, Léandre’s dog, in an impromptu dialogue with Lewis – the inlay informs us that no animals were mistreated during the recording, and the boxer even has her own Discogs entry. 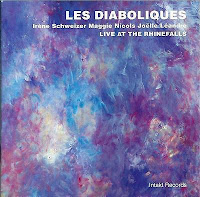 Les Diaboliques is the long-standing group comprising Irène Schweizer (piano), Maggie Nicols (voice) and Léandre, presumably named after Clouzot’s classic, and still chilling, 1955 film of female duplicity. Recorded at the Rhine Falls in Switzerland as part of the 1997 Schaffhausen Jazz Festival, this is an excellent example of what the trio can get up to.
Léandre is someone for whom the theatrical aspect of music has always been present – she’s worked in the theatre and with dancers and poets, giving her a sense of stage time – and Les Diaboliques is fundamentally a dramatic unit. There’s no substitute for seeing them perform, but there remains much to enjoy in their recordings, which contain some of Nicols’ best and most entertaining work. Capable of shifting from diva to pantomime dame in the space of a few seconds, and able to encompass everything from phonic scat to sweet melodies, Nicols is possessed of a wonderful singing voice. Mostly, she uses it as a third instrument, following and echoing her colleagues’ lines, rousing and undermining them.
We open with ‘Mercurial Drama’ and the title really says it all: Nicols’ impassioned wordless vocal, sometimes manic, other times folky – with some nonsense foreign language interjections and hammed up chuckles – while Léandre and Schweizer dart and scurry impishly around her, throwing in some silent movie skits and a bit of boogie-woogie. There’s even some tap dancing from Nicols.
Léandre frequently uses her voice in performance, which she sees as an extension of her instrument (possibly due to her teacher enjoining her to make the bass sing).  There’s also a lot of mimicry and humorous dialogue with Nicols, though admittedly much is lost without the visuals.
It’s not all tomfoolery, however. There’s a lateral thinking at play in the way Nicols floats between sounds, syllables and singing at the beginning of ‘Almost Straight Ahead’, over Schweizer’s recital accompaniment. The piece then dissolves into blurred speech with pointillist dabs and accelerating spurts on bass and piano, and concludes with a catchy blues melody. ‘Rheingefallen’ is a piano interlude, which has the same stream of consciousness flow, and ‘Tongue Talking’ is the trio’s exploration of diffuse lines, fusing and separating.
‘Diverse Moods’ Wings’ begins with Nicols monologue on what it means to have a good time and other musings on the medicinal treatment of unhappiness, which probably doesn’t bear repeated listening, but eventually it settles into excerpts from popular songs, some more tap dancing, despondent moans, bucolic babbling, and other therapeutic noises suggesting that she at least, is having a good time.
The concert ends with ‘Vals Diaboliques III’, loosely based on ‘Softly as a Morning Sunrise’ with some lovely singing from Nicols and sensitive accompaniment from her friends. 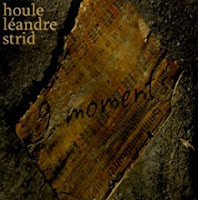 Recorded in the studio and at a concert in Victoria, Canada in November, 2006, the trio of François Houle (clarinet), Léandre and Raymond Strid (percussion) perform nine pieces which exemplify Léandre’s observation that “improvisations are born and die, they are ceaseless little ecstasies and rebirths”.  Here, the title to each “moment” is an indication of its placing, mode or prevailing tone.
‘Moment Premier’ is a short, carbonated introduction, which slowly fizzes to silence, followed by the more substantial ‘Moment Grave’, a study in stasis – Léandre sustains a subtly inflected note, skirted around by Strid’s mallets and Houle’s meandering figures, their decorations gradually becoming more elaborate. Bass and clarinet then merge as the vibrating tone intensifies. After an episode for percussion alone, the protracted intonations return, this time with bass, vocals and swirling clarinet, rising and then sinking back into a long drone and woodwind dirge. The ensuing ‘Moment Calme’ is a lighter affair, a jumble of split notes, bustling bass and erratic drums.
‘Moment Tendu’ is about extending the most basic material – Houle’s circular breathing and bubbling contours, drum rolls, shuddering bass and bowed tremors – but also the lyrical expansion of simple motifs, exploiting Houle’s beguiling, lacquered tone. In the seemingly negligible the considerable is to be found.
The duo ‘Moment à Deux’ blends spectral bass harmonics and playing close to the bridge with soft cymbals, and in ‘Moment Clé’ a jerky animation from all three is the driving force, winding down in spasms to its conclusion. ‘Moment Spatial’ has Houle’s gentle configurations hovering over Léandre’s sonorous pizzicato; by contrast ‘Moment Donné’ is a skein of looping clarinet and agile drums. We end with ‘Moment Final’: spare, poised gestures and intimations of something more – a reflective close to a diverse collection.