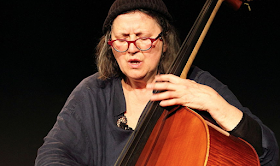 A remarkable moment. Joëlle Léandre, the grand lady of the bass, the mother of free improvisation celebrates her 40th anniversary "on the road". She graduated with a first prize at the music conservatory of Paris, then performed with Morton Feldman, John Cage and Merce Cunningham. She graduates at the age of 21 in 1972. Then she decides to perform freelance in chamber orchestras, playing Bach, even if by that time her true vocation, improvised music had already appeared in her life, the opening, the escape route from the obligatory classical way of playing, the door into freedom.

In 1976, she received the double-bass part of John Cage's Concerto for Orchestra. He dedicated it to her : "For Joëlle, best wishes in America and in France". In her book, "A Voix Basse", she says: "I went to see him in New York, in his Bank Street loft. I remember it like yesterday, that winter's day in 1976. It was snowing. He had plants all over his place, a proper garden! He'd been a disciple of Suzuki, the Japanese philosopher, who strongly influenced him... John made me listen to the world around me. 'Let the sounds be what they are', he said to me" ... He was part of a major choice I made: no longer would I ever just be a bass-player in an orchestra or an ensemble". That is the beginning of fourty years on the road. She met John Zorn. She met Derek Bailey. She met Giacinto Celsi. She found her own voice. Lived abroad, in New York, in Buffalo, in Berlin, in Japan, in the United States again, meeting people, recording, and listening, refining her art, her own special voice, of anger, aesthetic beauty, raw energy, sometimes clownesque, often very profound and deep, always herself. I can recommend her biography, which appeared both in French and in English.

She's the grand lady of the bass. Impossible to pigeon-hole, and impossible not to like. We will spend the whole week on her music, some of the older albums, some of the music that is now released to celebrate her fourty years on the road, by RogueArt, by Fou Records, and the 8 CD box by Not Two.

There is a concert to celebrate her tonight in Paris, at the Eglise Saint-Eustache. We never announce performances, but today we make an exception, if there are still some places left.

For those interesting in reading about Joëlle Léandre we can recommend the following books:

It's the same book, translated.