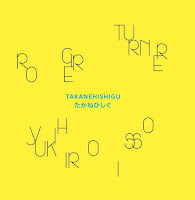 One of the most fascinating aspects of traditional Japanese bamboo flutes, from the shakuhachi of Zen buddhism to the nohkan of Noh theatre, is how they redefine, to our Western ears, the idea of virtuosity.

Due to materials and construction each specimen has its own peculiar sound, and the highest level of musicianship is achieved when the instrument's inherent character is amplified by the physicality of the musician, when breath and articulation take the inner voice of the flute and elevates it to its full potential.

In a sense there's a strong similarity to the jazz and free improvisation worlds, where a personal and unique approach to the instrument is a key factor in determining the incisiveness of the musician's technique.

And this kind of tangible physicality might well be the defining trait of Takanehishigu, recorded live at London's Cafe Oto in late 2015 and documenting the first encounter between flutist Yukihiro Isso and percussionist Roger Turner.

Isso mainly operates in traditional Noh theatre performance, coming from a long family tradition of nohkan players dating back to the 16th century. He also has a long experience in Western musical styles and improvisation, and has worked with Cecil Taylor and John Zorn, among others. Roger Turner is a veteran of the English jazz and improvisation scenes, active since the mid-seventies in important duos with Phil Minton and John Russell, and in different configurations with many other improvisers.

The first few minutes of Takanehishigu are built on a slightly disjointed, urgent exchange of ideas, gradually focusing on a parallel musical activity that develops through loosely connected episodes, the musicians constantly adjusting to the overall mood but always keeping a clear independent voice, avoiding the most obvious interactions in favour of an unpredictable sonic landscape of strong rhythm formations and rarefied textural shades.

Isso has a very peculiar style — suggesting both folk playfulness and ritualistic rigour — and a taste for clearly delineated melodic statements and insisting rhythmic figures. Turner for the most part choses to work around Isso’s ideas, calibrating his vast arsenal of percussive colors to complement the continuous flux of shifting textures and rhythms put forward by the flutist, subtly altering the direction of the performance with carefully handled dynamics and subtle yet incisive details.