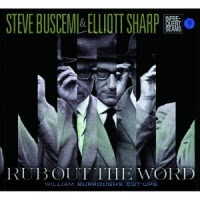 William S. Burroughs is one of the icons of pop culture. With Jack Kerouac and Allen Ginsberg he belongs to the triumvirate of the Beat generation. His novel Naked Lunch influenced artists like Patti Smith, Lou Reed, Laurie Anderson, Susan Sontag, Robert Wilson and many more. He invented the words "Heavy Metal", "Steely Dan" and "Soft Machine" and his drug consumption was legendary. Ornette played on the soundtrack of David Cronenberg’s "Naked Lunch" movie.

Many of his writings are based on the so-called cut-up method, an aleatory literary technique in which a text is cut up and rearranged to create a new one (he’s said to have invented it with Brion Gysin in the late 1950s, although the technique had been conceived originally in Tristan Tzara’s How to Make a Dadaist Poem (1920)). Another important element of his style are so-called oral “routines”, satiric or surreal sketches which later grew, expanded, imploded and folded in on themselves to create new texts.

Buscemi (famous for his roles in the television series Boardwalk Empire and The Sopranos and films such as Fargo, The Big Lebowski and Reservoir Dogs) and avant-garde guitarist/multi-instrumentalist Sharp teamed up for the live performance documented on this album.

Key topics of the performance are the cut-up method, different forms of control, the advantages and disadvantages of various drugs (Burroughs called it “junk“), sex, the art of writing and language as a virus.

However, what is most interesting about the performance is the fact that Buscemi imitates Burroughs' characteristic gravelly delivery and enriches it with his own distinctive voice - as if he was a Burroughs impersonator playing a cover version of a Burroughs song. This works out nicely because he uses Burroughs’ texts like riffs, tunes, and melodies, which he re-organizes to different pieces in the best cut-up tradition. You can hear this when comparing “Rub Out the Word” and “Taking the Virus”. In the first, Buscemi talks about the idea of rubbing out the Kabbalah and the Talmud, the works of Marx, Lenin, Freud and others. He claims that the written word is a virus that only made the spoken word possible and that the written word was not recognized as a virus because it has established a stable symbiosis with the host (in this case: man) as can be seen when you look at animals, which have no written word. That’s why Burroughs/Buscemi calls man the time-binding animal. In “Taking the Virus” Buscemi takes up several ideas again, like “the word as a virus“ which is there to exterminate human life on this planet, “the stable symbiosis”, man as “the time-binding animal” etc. Buscemi actually invigorates the track by reading in a rapid-fire, breathless voice as if a saxophonist would use circular breathing, conjuring images of the apocalypse.

All this is augmented by Elliott Sharp's guitar and electronics, which create a spooky background. Supportive and atmospheric, Sharp’s feedback drones complement the surreal passages (especially those about Dr. Benway, Burroughs’ most famous literary figure) as well as the funny ones (like the passage in which a man teaches his arsehole to talk). Sharp’s contributions are rather economical, he stays in the background most of the time, never competing with Buscemi for the audience’s attention.

All in all an album for die-hard Burroughs fans (who also own the excellent Dead City Radio album, for example) but it might also work as an introduction for those who are not familiar with the writer’s work at all.

Rub Out the Word is available on CD.

You can buy it from www.downtownmusicgallery.com

You can listen to the album here: