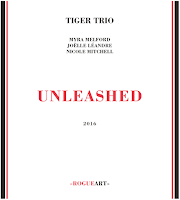 An interesting grouping, with semi-frequent collaborators Joëlle Léandre and Nicole Mitchell teaming up with Myra Melford for a live performance of freely-improvised music. Although each of these players is known for their compositional and improvisational prowess, Melford has done comparatively less work in a purely free vein, so I approached this record with a good deal of inquisitive interest. How would Melford’s lyrical approach to the piano, typically working within well-defined compositional parameters, fare in this unstructured context? Quite well, actually. All three musicians establish a sympathetic rapport that results in a beautiful, graceful musical vision.

The group’s name (and the title of the record for that matter) is a bit misleading. Most of the music here isn’t “tiger”-like at all, and it certainly isn’t out-of-control aggressiveness. On the contrary, as freely-improvised music goes, this is remarkably disciplined and focused, with an emphasis on careful collaboration and mutuality that gives each track a unified feel and strong tonal center. I couldn’t determine if the names of the tracks were assigned after the recording, but they’re all nature-themed: “Bright Sunshine,” “Threatening Clouds,” “Summer Rain,” and so forth. Even here, the titles of the tracks don’t always seem obviously connected to the music itself: “Heavy Hail” moves loosely around a deliberate, even meditative bass figure by Léandre and gentle, yearning phrases from Mitchell, and “Dazzling Snow,” the record’s closer, is one of the record’s more rambunctious and ominous tracks, with Melford’s percussive left hand in punchy dialogue with Mitchell and Léandre.

But no matter. The music is frequently transfixing and stunning in the intricate interplay involved in its creation. Mitchell’s technique on the flute is impressive as always, as she alternately offers multiple tones, rapid runs, and an occasional touch of mysticism (evident on “Heavy Hail” in particular). Melford’s approach typically involves dense clusters of notes, particularly in conversation with Léandre, who is as stylistically diverse and virtuosic as always. Whether in dynamically rich, propulsive arco passages or simply plucking a few well-chosen individual notes, Léandre serves as a vital lyrical force, often referencing and elaborating upon the tonal palettes utilized by Melford and Mitchell. On the second track, “Freezing Rain,” Léandre matches Melford’s agile locutions superbly, the two musicians in perfect rapport, each with the utmost confidence in their own statements but with the care in listening needed to develop their ideas in true conversation. And hearing the three together on “Dust Storm,” with Mitchell’s swirling flurries dancing around the more percussive contributions of Melford and Léandre, we are given a stirring reminder of just how much music can be created through purely spontaneous improvisation.