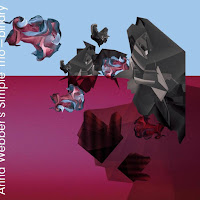 For three years now, New York-based flautist/saxophonist/composer Anna Webber has spent much of her time oscillating between the complex, multi-faceted, and textured jazz of her septet Percussive Merchanics, and the more minimal approach that Simple Trio deals in. It is this latter group, consisting of Webber, John Hollenbeck on drums, and Matt Mitchell on piano, that has produced the magnificent Binary. In many ways, Webber’s Simple Trio is a scaled-down variant of the knotty compositional avenues she has surveyed with Percussive Mechanics. As in that larger group, the musicians here explore the intersections between rhythm, timbre, and melody, and they do so without ever abandoning the angular twists-and-turns that have characterized Webber’s best work.

“Rectangles 2” wastes no time in transporting you to Webber’s world. It’s a world made up of discrete units of melody that, at first listen, seem to clash, but eventually reveal themselves to be locked together in their own, singular kind of harmony. “Impulse Purchase” expands upon this restless push-and-pull with a wondrous showof space. Hollenbeck doesn’t shy away from forceful, muscular flows, but what’s more often on display is his restraint - he ties his piecemeal rhythms to Mitchell’s martial blocks of sound, and this connection serves to highlight the percussive nature of the compositions. Likewise, Webber casually resists the urge to send her tenor on fanciful flights or errant excursions; in place of wild spurts of warm blood, she offers coolly-calculated drips from an I.V. machine. On one track, the appropriately-named “Tug O’ War,” Webber switches to flute, and the change seems to inject the whole group with a nervy restlessness that’s even more pronounced than usual. In that piece’s middle section, Hollenbeck trades terse, geometrical patterns for textural explorations, and Mitchell provides the twinkling backdrop to Webber’s breathless, near-frantic improvisations. It’s an intriguing change of pace for a group that often seems to be marching in ineluctable lock-step.

When the group lets loose a little, as on the fast-paced joy-ride of “Underhelmed,” it’s a joy to hear. In this piece, Hollenbeck’s rhythms are loose-limbed and groove-laden, and they bring an irresistable swing to the party. In similar fashion, Mitchell slides with a newly-energized fluidity over the keys, and Webber’s streams of notes become downright torrential. The presumable centerpiece of the album, “Binary,” is an exercise in brooding drama, with frenzied drops of fire that occasionally come to melt the piece’s icy exterior. Mitchell is the melodic backbone of the composition, playing a skeletal, yet profound, motif that wouldn’t sound out of place on Olivier Messiaen’s famed Vingt regards sur l'enfant-Jésus. “Disintegratiate” sounds like an ode to Thelonious Monk, but one that hammers a few nails into Monk’s famously wooden progressions.

Despite the implications of its title and the name of the group itself, Binary is not simple. Webber’s compositions are full of intricacies and inexplicable shifts, and it’s never easy to predict the direction any given piece will take. In addition, Matt Mitchell and John Hollenbeck are the perfect complements to Webber’s curious style, and they add their own idiosyncracies that help to further elevate the music. The world of Binary is one that wavers between moments of pinpoint accuracy and hazy unpredictability - perhaps that’s the duality that the title is hinting at. This is a fantastic record, and it comes highly recommended!