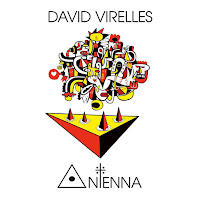 In just two albums, 2012’s Continuum and 2014’s Mbókò, David Virelles has shown himself to be one of our most forward-thinking pianists and composers. His compositions have an advanced flow and structure, typically eliding direct melodic statements in favor of developing heavily textured and thematically rich soundscapes. Mbókò subtitled, “Sacred Music for Piano, Two Basses, Drum Set and Biankoméko Abakuá,” hinted very strongly at a future direction for Virelles. Where I expected the instrumentation—particularly with Thomas Morgan and Robert Hurst doubling on bass—to take Virelles’s sound closer to Cecil Taylor’s Blue Note albums, the result was a more opaque and emotionally complex album that remains one of my favorites from 2014. On Antenna, a brief digital and vinyl EP running about 20 minutes, Virelles extends that sound significantly. Antenna is largely the result of a collaboration between Virelles and cellist Alexander Overington, both of whom contribute samples, programming, and production to the whole EP.

On the opening track, “Binary,” Virelles introduces Los Seres, a fictional percussion ensemble, programmed by Virelles, which I don’t know much about, but it seems to rely on stochastic elements. Los Seres briefly recurs on the final piece, “Text,” but there’s a lot of promise here. For example, percussionist Román Díaz, Virelles’s longtime partner, doesn’t appear on either track, but you there’s groundwork laid for combining the Mbókò and Los Seres groups, fusing organic percussion with programmed variables. Then, on “Water, Bird Headed Mistress,” Virelles’s mentor Henry Threadgill makes a brief appearance on alto sax. This is the first time the two have performed together on record, but they’ve collaborated for many years (Virelles also performs in Threadgill’s Ensemble Double Up, which released this year’s epic Old Locks and Irregular Verbs). “Rumbakuá,” which features Cuban rapper Etián Brebaje Man, similarly highlights some thrilling changes afoot. Brebaje Man raps over a surging uptempo drumbeat rounded out by chunky keyboards and Mauricio Herrera’s percussion.

“Threshold” and “El Titán De Bronce” are both the longest and the most Virelles-sounding tracks, if such a descriptor still holds meaning after this EP. Drummer Marcus Gilmore (who also played on Mbókò) and guitarist Rafiq Bhatia appear on both, but the tracks’ similarities end there. “Threshold” opens with buzzing insects and chirping birds before pivoting into a series of solos, moving rapidly from Overington’s cello to Gilmore’s drums. Virelles provides a thick backdrop, and eventually Díaz emerges with a short vocal line that signals another shift. Later, “El Titán De Bronce” features an atonal piano fugue that cycles through a few times, before opening up to an extensive, relaxed solo from Virelles. On both tracks, Bhatia’s guitar proves a balancing force, contrasting the earthiness with an airy texture that winds its way throughout.

I can’t wait to hear where Virelles goes next. This is an eclectic album, more of a preview of what may come next, but it’s an intriguing and unexpected collection. It’s recommended whether you’re already familiar with Virelles or not. And if you start here, I highly recommend going back to both Continuum and Mbókò, as well.

Great review which neatly encapsulates much of my thinking about Virelles until now (although I'd missed the Cecil BN link which I shall now listen out for), thanks.

I agree that on the strength of the two previous albums Virelles really is someone to watch out for and the development between Continuum and Mboko surely highlighted his talent. The prospect of this new music being a further adventurous development is enticing indeed and I'm intrigued that again he's moved into areas not previously obvious. After Lehman's seamless work with rap I'm intrigued to hear how Virelles pulls it off

I saw the Mboko band play that album live at it's a memory that will stay with me for a very long time. Mention of his work with Threadgill prompts me to note his work previously with Steve Coleman who I suspect may have been another guiding light (I hear Coleman's influence increasingly broadly across many of today's interesting musicians).

Thanks! Most definitely, there is a strong Coleman influence felt here, as well. I had Threadgill front of mind, I guess, because of his presence on the album. When are we going to get a proper release of Coleman's Reflex Trio?

The interesting thing about Mbókò and Cecil's BN albums is they sound almost nothing alike, and yet I think of Unit Structures, especially, every time I go back to Virelles's album.