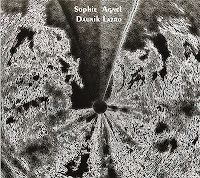 French pianist Sophie Angel and sax player Daunik Lazro can create a whole sonic universe every time they touch their instruments. Weird and intriguing universes that refuse to conform to any familiar musical convention yet offer profound and arresting poetic sensibility and inventive game-like plays. These two master improvisers began to collaborate a decade ago in Lazro short-lived quartet Qwat Neum Sixx (that has released only one album, Live at festival NPAI 2007, Amor Fati, 2009), but continued to perform as together in other formats, often with double bass player Paul Rogers or guitarist Olivier Benoit. These shared experiences enriched Agnel and Lazro vocabularies and perfected their immediate interplay.

Marguerite d'Or Pâle captures the duo of Agnel and Lazro performing live at the Dom club in Moscow on June 2016. The title of the album, as well as the titles of the improvisations, draw their inspiration from the classic novel of Russian writer Mikhail Bulgakov ‘The Master and Margarita’. These improvisations sound as consciously corresponding with the amused, mysterious and often subversive spirit of Bulgakov imaginative plots.

The six improvisations enable both Agnel and Lazro to employ their highly personal approaches in ways that suggest haunting, kaleidoscopic atmospheres. Agnel sets the outlines for the ethereal, adventurous structures of these improvisations, wisely charging these pieces with restrained dramatic tension, while Lazro balances her playful juggling with forms with intensive flow and occasional eruptions of colorful ideas. Lazro, who focuses here on his tenor sax more than his baritone sax, demonstrates his impressive breathing techniques, whispers and speaks unintelligible words through the mouthpiece. Agnel adds extensive preparations to the piano strings, transforming the keyboard into an instrument that produces abstract, sensual and sometimes even beautiful-disturbing sounds.