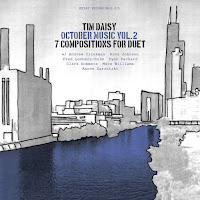 Two years have passed since the first volume of Tim Daisy's October Music, a very sturdy group of seven duets that provide the conceptual foundation for this new volume. At first glance, the new collection almost reacts against the former. Most of the new compositions are skeletal - almost sketches - that are strong and inspiring; but are such a 180 degree turn away from the earlier careful constructions they come as a bit of a shock. On the surface, the themes are almost Ayler-ish: very sturdy compositions that function like a quick shot of whiskey, there to help the players build up enough nerve to be free and blow their asses off for awhile.

But that's not it. This isn't a free-for-all blowing session at all. These are compositions, no matter how minimal. There is definitely a frame for the contents of each duet; but the structure is more flexible than before. It's as if the duet is being put in the position of becoming the composition. Daisy is simply creating the conditions for this to happen. Hear me out: listening is the most important part of improvisation; and the same is true in conversation. So if the art of listening changes a conversation, can it do the same for a composition? It's almost as if the written structure remains implied even after the theme is dismissed, the same way implied rhythm is present in many instances of unmetered time. In this way it is possible that Daisy is as much director as composer of these pieces. I don't have any answers; but the questions surrounding Daisy's intentions make my head swirl like his melody lines.

Nothing can prepare you for the opener, “Radiant.” The track makes several jarring cuts between an impassioned vocal loop, a garage band blasting out a one-chord riff, and Andrew Clinkman's face-melting guitar noise. This is followed by “Type-M,” which features Mars Williams on soprano sax and percussion. Again, the cuts are jarring between sections. When the duo begins to improvise after the theme, the sound lurches this way and that, as if they are becoming disoriented by all of the sudden movement. There is a softer, exotic sounding middle section which falls into a collage of percussion and squeak toys – before lurching into a wild shrieking finale.

Cellist Fred Lonberg-Holm joins Tim on the prickly “Black Mountain,” featuring a tip-toeing theme that alternates Fred's catchy pizzicato plucking with Tim's melodic brushes-on-metal-bowls. After the niceties are out of the way, Daisy and Lonberg-Holm hurl all the cats and bedpans into the grand piano. There is a movement toward conventional structure along the way, but it is quickly tossed aside. Then the musicians take quick turns at the theme and the piece ends abruptly. There is only one track more “out” than this one, and that is “Wires and Static” with Aaron Zarzutski on synth and percussion. It's a really fascinating piece, subtle and almost purely sound-based. I'm not certain if there is a technically composed theme here; but there is definitely a conceptual one. This piece is also a great example of how expansive and playful Daisy's music has become over the last couple of years.

Ryan Packard plays on the drum duo “Songs For Dancers,” which features a theme that is free, thoughtful and purposeful. The interplay is playfully serious and confounds observations as quickly as they arise. Daisy plays a similar theme on the boppish “Tandem,” featuring trumpeter Russ Johnson, who turns out to be a fascinating match for Daisy. “Seeing” with bassist Clark Sommers closes the disc with a slow, loping theme. He and Daisy take turns at being the “leader” on winding lines that have become a Daisy trademark. The improvised section is short, but just the perfect length to change your perspective before flipping the theme back on you. The winding melody placed at the end of the disc is familiar and comforting – but you arrive here with new ears. October Music Vol. 2 isn't a sequel. It's a deeper cut.