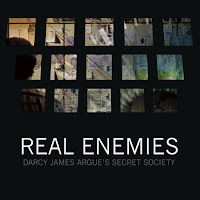 Somehow, I discovered Darcy James Argue not through his music but through a blog post of his about the death of author David Foster Wallace in September 2008. This was a few days after my birthday, and my wife was weeks away from giving birth to our first son. Wallace was, for me (as well as for Argue, it turned out) a massive influence, a thoughtful, curious light who seemed to be leading a way forward. I had (again, like Argue) consumed Wallace’s Infinite Jest upon its publication, reading it twice within a year and writing a portion of my senior thesis on some of its familial themes. It must have been through Facebook or Twitter, but someone had shared Argue’s blog post about Wallace, and it stuck with me, partly for the similarities in our experience (not that unique, among Wallace acolytes, if I’m being honest) and partly because I was suddenly curious about this so-called Secret Society. This was still several months before he would release his debut, Infernal Machines, and promptly rock my world.

I’ve been an avid, vocal fan of Secret Society for nearly ten years, playing the albums on loop, streaming and downloading live recordings from Argue’s old website, and eagerly anticipating any new album. The third, Real Enemies, was released last year and really pulled off an interesting trick of sorts. Similar to the previous album, Brooklyn Babylon, the premiere of Real Enemies featured a multimedia program that augments the music. Unlike its predecessor, however, Real Enemies is so fully realized that I’m not sure I ever care if I experience fully.

For those unfamiliar with the Secret Society, on the surface it looks like a traditional big band, with 18 members plus Argue as composer and conductor. Secret Society includes some names who have appeared on the blog, but most, I think, may be new to readers: The winds are Dave Pietro, Rob Wilkerson, Sam Sadigursky, John Ellis, and Carl Maraghi; the brass section is Seneca Black, Jonathan Powell, Matt Holman, Nadje Noordhuis, Ingrid Jensen, Mike Fahie, Ryan Keberle, Jacob Garchik, and Jennifer Wharton; and the rhythm section is Sebastian Noelle, Adam Birnbaum, Matt Clohesy, and Jon Wikan.

As with Wallace’s writing, Argue’s music is both reverential and referential, a knotty collection of highly original compositions, comprised of themes and callbacks that build successively, creating a wholly unique sound world. Conceptually inspired by modern conspiracies (the cover art suggests one of those conspiracy walls that keeps popping up in TV and film), Argue takes a series of ideas and pursues them musically, pairing titles and samples with ideas that chase down the effect of both actual conspiracies and the threat posed by imagining webs looming larger than what we comprehend. It’s something of a mix between a meditation and a thesis.

“The Enemy Within” opens with a funky bassline that recalls ’70s political thrillers, which only fully comes to fruition on the opener of “Dark Alliance,” a jazz dancefloor single begging to hit the jukebox nearest you. With samples of Nancy Reagan intoning “say yes to your life” and one of the most, yes, addictive melodies I heard all year, “Dark Alliance” is winking and delirious. It leads into the cloistered, tense “Trust No One,” a theme that continues to resonate and deepen far beyond what Argue could have intended. “Silent Weapons for Quiet Wars” features a lengthy group improvisation, lead primarily by Noordhuis and Garchik, with Birnbaum’s tense piano line threading its way through the background.

The midpoint of the album, “The Hidden Hand” opens with JFK, in 1961: “We are as a people inherently and historically opposed to secret societies, to secret oaths and to secret proceedings.” This sets of a dark, introspective sequence that leads from “The Hidden Hand” through “Casus Belli” and “Crisis Control,” into the lengthy “Apocalypse Is a Process.” There’s an ethereal, space-age vibe to the opening of “Never a Straight Answer,” which slowly morphs from a Birnbaum solo into Clohesy’s bass synth-driven funk dirge. The finale is a pleasingly chaotic group improvisation that leads directly into James Urbaniak’s excellent narration on “Who Do You Trust?” The album is bookended by “You Are Here,” which features excellent solos from Sadigursky and Jensen in both parts, as well as a piercing narration and chilling samples.

Real Enemies is a striking and wildly successful work of art. In the final minutes, Urbaniak narrates, “When citizens cannot trust their government to tell the truth, they become more susceptible to that dread disease, conspiracism. They become less likely to trust their government to do anything, to conduct fair elections, say, or spend their tax money, or protect their children, or their planet.” The tone is urgent, a warning of sorts against slipping into paranoia. But hearing it today, Argue’s work also seems to ask both “why are you paranoid?” and “are you paranoid enough?” In the world we’ve woken up to today, Real Enemies serves as both fierce polemic and critical analysis, both a call to action and a call for reflection.