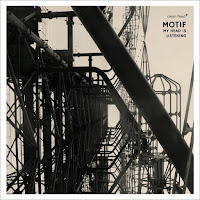 Scandinavian group Motif released their last record for Clean Feed, the wonderfully-titled Art Transplant, around five years ago; their newest release, My Head Is Listening, sees them expand from a quintet into a sextet, thanks to the addition of clarinetist Michael Thieke. As for the older players, there’s Ole Morten Vågan on double bass, Håkon Mjåset Johansen on drums, Håvard Wiik on piano, Atle Nymo on tenor saxophone and bass clarinet, and Eivind Lønning on trumpet. Like their previous effort, My Head Is Listening strikes a fine balance between knotty, obtuse moments of improvisation, and more structured segments that display the group’s tight interplay and excellent melodic sensibilities. In short, there’s something for everyone!

The title track brings both of these elements together in a magnificent way, with Håvard Wiik’s jaunty piano lines suggesting a kind of art-damaged swing. The piece keeps the listener on his or her toes, swaying wildly between bursts of melodicism and dark, meditative stretches that are largely lacking in percussion - Atle Nymo tackles both of these with gusto, employing his tenor saxophone for the wilder moments and his bass clarinet for the more pensive sections. On the next piece, “Beams, Dreams, and Automobiles,” newest member Michael Thieke has his time to shine, with a frantic, forward-tumbling solo on the clarinet that belies the instrument’s rather staid reputation. Here too, Motif show just how well they can adjust and manipulate the intensity of the music - from the breakneck pace of the opening, to the roiling disquietude of later parts, this track reveals a group with a firm grip on the sonic pressure-valve.

Motif seem to be at their best when they take this chiaroscuro approach; at least one of the pieces, “Little Cage,” relies almost completely on skeletal, shapeless atmospherics - this track, while somewhat interesting, fails to capture the controlled chaos that the group excels in, and is too monochromatic for its own good. Thankfully, Motif never get stuck in that mire for too long: tracks like “Jazz Composition XKY53” are slow-moving without being slogs to get through, and “The Guns of Amarone, Episodes 1 & 2” is a ten-minute exercise in excitement, with drummer Håkon Mjåset Johansen and bassist Ole Morten Vågan pushing the piece ever-forward with restless, shape-shifting patterns that help ground the serpentine movements of the soloists. As with fellow Scandinavians Cortex, the best moments on My Head Is Listening are those during which the raw physicality of the rhythms meets the brain-melting abstractions that the reeds and brass conjure up.

My Head Is Listening is a great record, and one that fans of Cortex or Friends & Neighbors, or even similarly hard-driving free jazz like Ornette Coleman’s first quartet, would be wise to pick up. Available now via Clean Feed!
Paul on Thursday, January 19, 2017
Share