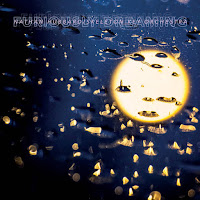 What better way to end a week of big band reviews than with a two-disc release featuring a total of 49 musicians? Californian drummer and composer, Nathan Hubbard and his Skeleton Key Orchestra's Furiously Dreaming is a sprawling mixture that features in all 49 musicians and encompasses many styles and approaches over its two hours of playtime. It's a lot to take in, and the breadth of musical styles is, well, breathtaking. Picking just a couple tracks to talk about hopefully is enough for a good introduction.

The opening track, 'Crows on the Roof', begins with a mash-up of Crimsonesque power and Soft-Machine sax work, which eventually leads to a mix of electric guitars, electronically processed percussion, and reed and horn sections revelling in juicy counter melodies -- by which all I really mean to say is that it is pretty damn intense! There is even a spoken word passage lending an air of intrigue and mystery. The second track, ‘Mirror Forget’, is more a free playing session. Accompanied by a chattering electric guitar that seems to bind the group together, they rise and fall in swells of large group improvisation and smaller improvising units. The follow-up, “sleepsdreamsilence’ is an abrupt change of pace, in which a string section creates a lush, tense, soundtrack like atmosphere, just right for a spoken word passage delivered by Roger Aplon and Sister Rez. Finally (for this review), title track 'Furiously Dreaming' begins as an angular piece - guitar, piano, drums and strings scratch, skitter, and pluck but ends with a composed melody underscored by a chorus of voices.

There is a lot more to hear, as the album is a showcase of Hubbard's expansive musical concepts. The eight tracks of the album are a diverse set that was recorded over the space of three years (2007 - 2010). While a mix of styles, each generously portioned track stands on its own. It's a really interesting recording that beckons for repeat listens, and I've only just begun!

For a full list of the musician's, please see here.