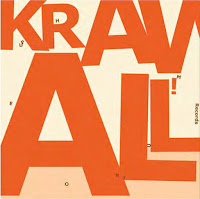 In my review of Tumult!, the New Old Luten Quintet’s previous release, I wrote that the improvisation “Lutens Letzter Tumult!“ (Luten’s Last Tumult!), suggested we might not hear East German free jazz legend Ernst Ludwig “Luten“ Petrowsky in such energetic surroundings again, but I hoped we would. My wish has come true: Krawall! is another excellent recording.

Krawall!, German for “riot“ or “ruckus“, implies a certain aggression and yearning for destruction (as Günter “Baby“ Sommer puts it in his contribution to the wonderful liner notes), as in the early days of European free jazz when Peter Kowald coined the phrase “Kaputtspielphase“ (blowing to pieces) when the music was often associated with a destructive iconoclasm.  But Krawall! is much more than displaying current individual moods, it’s no barometer of an imaginary emotional state of mind. The word has pejorative overtones, but in this context it suggests expressive power. It’s not all energy playing, however: the Quintet creates a carefully balanced improvisation.

The album consists of a single 30-minute piece – “Letzter Krawall“ – divided into three parts, distinguished by contrasting dynamics and instrumental breaks. After hectic and intense passages, characterized by Petrowsky’s harshly overblown melodies and Schwerdt’s Tayloresque runs and chords, they often drop out to give the music time to breathe. The two basses and the drums maintain a frenetic velocity, it’s as if carried along in one another‘s wakes. At one point, the piano hammers a single note repeatedly, like a manic stopwatch, while Lillinger rattles and fizzles and Petrowsky throws in short bebop licks. After ten minutes things become gloomier, verging on dissolution, but the basses pick up the loose ends and rethread them. Schwerdt plays inside the piano and Lillinger uses all kinds of assorted percussion, augmenting the spooky atmosphere. A tuned down string on one of the basses sets your teeth on edge. The last five minutes revert to the tumultuous beginning, with the whole band going wild again. Finally, the music comes to an abrupt end with two notes on harmonica.

For Luten Petrowsky free jazz is an encouragement to combine Parker with Ayler, Coleman Hawkins with Ornette. He claims that avoiding conventions means ignoring history, being thrown back on yourself instead of creating something new on the shoulders of giants. For him, free improvisation is a kind of truthfulness. He says in the liner notes that he was very pleased with the gig as the quintet had performed as a real unit, and he was almost “high“ when he drove home.

And more good news: there’s nothing “last“ about this recording either – the band plans to release another album called Rabatz! a word with similar connotations to “Krawall“. Can’t wait to listen.

You can order the CD directly from Oliver Schwerdt.
Paul on Friday, January 13, 2017
Share