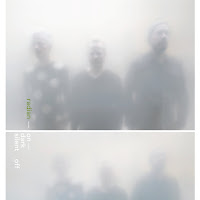 There is a something highly addictive in the music of the Viennese trio Radian that compels you to listen again and again to the new pieces of On Dark Silent Off. Radian may never really finishes the meticulous process of “constructing” these pieces, juggling with an alchemical juxtaposing of layers upon layers of subtle sonic extremes that offer an arresting map of timbral contrasts between lightness and darkness, sound and silence.

Drummer, vibes and electronics player Martin Brandlmayr and guitarist, lap steel, guitarrón and electronics player plus processing man Martin Siewert begin this process by experimenting, editing and transforming these pieces, sometimes for years. Both sculpt incidental sounds and abstract noises, beginning with samples of studio byproduct sounds - a cable entering the socket of a guitar, a switch, hums, fingers tapping on the string of a bass or the pads a saxophone or a hand gliding between two chords of a guitar; then interact these sonic elements with more physical, free-improvised, individual dynamics - including the ones of third member, Swedish bass player John Norman - into the suggestive - rhythmic soundscapes that await to burst into your ears.

You can still identify the personal voices and the distinct aesthetics of each of the musicians through these rich, otherworldly palette of fractured sounds - the urgent, laconic guitar attack of Siewert, the fragmented noises on the snare skin of Brandlmayr and the heavy, distorted bass of Norman. All three move organically and freely like tangent circles, each expands and refines his own sonic universe, suddenly these circles consolidate for a brief, powerful pulse that surprises you with its deep emotional impact and soon all recede to their distant universes, as it happens again and again on the opening “Pickup Pickout”. This working process asks you, the listener, to take an active role, to engage in this never-ending construction process, to fulfill the supposedly unfulfilled messages of these pieces.

On Dark Silent Off is titled after a quote of American painter Ad Reinhardt that somehow fits the album spirit of playing with contrasts. The title-piece follows this spirit, flirting with gentle yet broken atmospheric, acoustic soundscapes and an intensifying, massive pulse. The work on this album began already in 2012 when Radian accompanied the film Outer Space (1999), Peter Tscherkassky masterful black and white collage of found footage of a horror films. This mysterious-tempting experience originated the nervous “Scary Objects”. “Blue Noise, Black Lake” transforms a short sample of Mats Gustafsson playing the pads of his saxophone (Siewert plays with him in Fake The Facts Trio and recorded and mastered some of Gustafsson recent albums) into a recurring, rhythmic element that awaits to explode in a concise, cathartic eruption. “Rusty Machines, Dusty Carpets” distills this pendulum move between exploration of subtle, microscopic sounds and tough, distorted groove into a perfection.