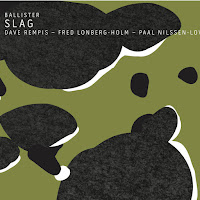 Ballister is Dave Rempis on saxophones, Fred Lonberg-Holm on cello and electronics and Paal Nilssen-Love on drums, and Slag is their sixth album.  On all their releases they've tried to stick to their original concept of fire-spitting, adrenaline-fueled music, but always looking to add new ingredients to the brew. There were the energetic explosions of their self-released debut Bastard String (2011), the blues-indebted riffs of Mechanisms (Clean Feed, 2012), the increasingly fragmented musical worlds of Mi Casa Es En Fuego (self-released, 2013) and the experimental hardcore melancholia of Worse for the Wear (Aerophonic, 2015).

Their new album is a mixture of all the above. It picks up the uncompromising approach of tracks like “Fornax“ from Worse for the Wear and it follows the same structure of their CD releases (due to format, the LP and cassette releases are different) – three tracks of more than ten minutes, the first one always a real killer, the second more introspective, the last optional (speedcore jazz or sound exploration). As on Worse for the Wear the song titles reflect a theme: for their last album they used constellations ("Fornax", "Scutum" and "Vulpecula"), now the tracks are named after medieval polearm weapons ("Fauchard", "Guisarme" and "Glaive"), which fits the sometimes belligerent attitude of the music (weapon fetishists can have a look here).

"Fauchard", the opening track, is a typical Ballister piece. It consists of a five-part sequence: first the band sprinting out of the gate with music of pure attack. Lonberg-Holm’s distorted cello sounds more like an electric shredder and Nilssen-Love’s drumming makes you think you’re in a particle accelerator. Both push Rempis, who manages to stay ahead of them with his shrieking, fast, overblown licks (listen to the marvelous passage at about the five minute mark). In this context his affinity with Peter Brötzmann shines through. Nilssen-Love almost brings the piece to a halt by dropping out at top speed - an effective trick often used by Han Bennink. Rempis and Lonberg-Holm seem puzzled, resulting in an unusually contemplative passage. The third part finds Nilssen-Love back in the game and immediately the piece is back in the previous mode, with Lonberg-Holm’s brutal attacks putting you through the grinder again. The fourth section sees Rempis leaving the arena to cello and drums, another quiet phase with Nilssen-Love mainly on cymbals. The last part loops back the beginning, powered by Lonberg-Holm’s feedback orgies and Rempis’ overheated runs going mental again.

Layer over layer, this music is sheer energy – unfiltrated, undisguised – but there are also lines working just under the surface and little gems, like the beautiful duet between Rempis and Lonberg-Holm in “Guisarme“, where the cello/electronics resemble a didgeridoo, or the dark, yet dreamy percussion that dominates large parts of “Glaive“.

The label’s website says that “although the band and these players are often characterized as working in “improvised music,” or “jazz,” or some other equally insufficient moniker, this music rocks in a way that “Rock” hasn’t in years“. Absolutely correct!

Slag was recorded live at Cafe OTO in London in March 2015. It’s available as a CD and a download from the label’s website or from the Downtown Music Gallery.

In addition to this recording, a vinyl LP titled Low Level Stink documenting the group’s Antwerp concert from the same tour, recorded one day earlier, will be available in early April 2017 on the Belgian Dropa Disc label. I’m looking forward to it.

Listen to the album here: