A few months ago we dug into a bunch of German jazz festival recordings from the 60s and 70s. It was a joy to spend time with those recordings, suffused in their history and importance, fortunately, it is suffice to say Germany is a still fertile ground for free jazz. Whether it's the rapid-fire ping-pong exchanges, tonal explorations, or extrapolations of the music from Ms. Pac-Man, ideas seem to be flowing free! 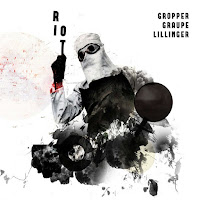 This isn't a debut - Berlin based saxophonist Philipp Gropper, guitarist Ronny Graupe and drummer Christian Lillinger have been sufficiently busy as Hyperactive Kid for well over a decade. They released a few albums on Jazzwerkstatt, and now as it seems that label is winding down a bit, the trio has hooked up with WhyPlayJazz, releasing a live album celebrating their first 10 years together (10 Year Anniversary Live, 2015), and have taken the opportunity to shed the old name. Their new release, Riot, is a texture rich album rife with exploratory electronic sounds, abstract rhythms, wrapped in the musical ease that a long time association can bring.

The opening track's title 'Being Dark is Easy' may as well refer to how naturally the spacious ambience of the night slowly passes until the melodic dawn. Once awake, the group stretches out its arms and embraces the new day. The musicians bring a range of approaches - the guitar is often minimal, offering judiciously placed single notes or chiming chord fragments, and sometimes flat out rocking. The sax, possible the most prominent of the voices, switches between staccato lines and flowing melodies, weaving between the drums and guitar. Of course, Lillinger is more than just the glue that holds the group together, providing pulse and texture, and injecting a lot of personality into the music. The longer tracks are interspersed with short sound exploration - like the 10 second clatter of 'Repeat!' and the minute and a half electric crinkle of 'Demons'. A great listen!  - Paul Acquaro 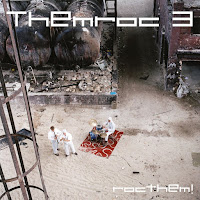 Two wind instruments and drums, the Berlin based trio of drummer Michael Griener, trumpeter Richard Koch, and clarinetist Benjamin Weidekamp excel in energetic, enjoyable music making. Parts and passages are obviously composed, there is no way that the syncopated and jaunty melody on tracks like opener 'Post für den Tiger' are made up on the spot, however, they are alive and delivered with as much fresh excitement as if they were. As the track progresses, the three splinter effortlessly into free improvisation.

The songs have elements of humor and reference to more traditional and folk music. Also, as melodic and entertaining as the winds are, special mention of drummer Griener is warranted - he is as much a melodicist as a percussionist, his work on 'Jippi Brown’s 18th Birthday' stands out. By the third track, 'Marsch' it seems like the group is establishing itself in the free-jazz/avant-traditional of the great Zentralquartett.  - Paul Acquaro 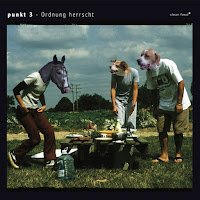 Leipzig's Punkt 3 is a trio comprised of Tobias Pfister (sax), Noah Punkt (bass), and Ramon Oliveras (drums). Ordnung Herscht, their album on clean feed records, is a bright, rhythmic work that combines improvised jazz with punk rock sensibilities. Noah Punkt in particular recalls Mike Watt in his playing, with strong notes and deft movements throughout that works well with Pfister's nimble saxophone play and Oliveras' drumming. Standout tracks are "Dieter-Miguel," showcasing Pfister's lyricism; "Rummeln," with its latin tinged polyrhythms, building towards a powerful closure; "Pacgirl," riffing off of the arcade game's theme song, and "Ponk," a free jazz skronk fest. All the tracks are short and to the point, no extensive jams here. And with its brevity, the smart variety of music, and excellent execution makes Ordnung Herrscht a delightful listen. Recommended.  - Stefan Wood 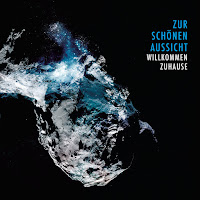 On this recording from the Dresden based trio Zur Schönen Aussicht, the playing is telepathic and the many pieces mesh delightfully. The website mentions that this was a recording of first takes - good energy coming from high stakes!

The group is saxophonist Paul Berberich, guitarist Joachim Wespel, and drummer Florian Lauer, all new names to me, and while the line up is similar to Gropper, Graupe, Lillinger, the music takes a different path. Whereas Gropper, et.al, really dig into the textures, Zur Schönen Aussicht are more straight ahead, melding choppy melodies, hints of modern jazz, and a little prog-rock into the mix (tell me 'Wir mit wem?' doesn't have a hint of 90125 in its DNA). There are moments, like in the track 'Kritische Masse' that I am reminded of the music of the Mary Halvorson Trio's album Dragon's Head - it has that same lean, angular, irregular, and accessible approach.

From the Ornette Coleman inspired riff on the opener 'Schwingen ohne Club', to the emotive squall and dramatic climax of 'Phlegma und Enge', and finally the woozy drone and gently unfolding melody of 'Herbstlichst', there is a lot to hear, here!
Paul on Friday, February 24, 2017
Share

No author on this piece?