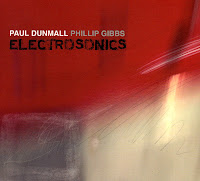 Electrosonics is the first album where Paul Dunmall has used the wind synth exclusively, and here he is joined by stalwart colleague Philip Gibbs on electric guitar to provide a creative set of improvised duets. There are nine tracks in total containing music that is a mosaic of close-knit and energetic interplay between the two musicians. The tracks are titled ‘Parts 1-9’ leaving any extra musical suggestion rooted firmly in the music, of which there is plenty for the whimsy of the listener to procrastinate over.

On ‘Part One’ Paul Dunmall sports an accordion sound which ends up sounding like a cross between the accordion playing of the late Pauline Oliveros and the Russian Balalaika group the Terem Quartet. ‘Part Three’ also starts with an accordion sound, again with folk-like references coming in the shape of a snatch of a polka-esque melodic phrase, whilst the space-flute type sound that Dunmall changes over to evokes fond memories of the classic British childhood TV program The Clangers. ‘Part Seven’ has an Arabic air about the piece whilst ‘Part Six’ conjures images of ethnic drumming rituals, mainly due to the carefully chosen timbres of Gibbs’ guitar and the techniques that he employs. ‘Part Nine’ explores the dirty, noisy and distorted side of electronic manipulation with both Dunmall and Gibbs sporting a distorted sound, which seems to provide a post-modern critique of Van Halen’s ‘Eruption’.

Paul Dunmall’s playing is one of exploration and searching and shows a master improviser at ease with his own vocabulary whilst Philip Gibbs electric guitar provides just as dexterous bubbling and scurrying melodic lines, which emulate the runs of Dunmall’s playing by tapping the strings with fingers and objects to elicit finely executed rhythmic motifs that are coloured further by the subtle use of effects. Due to the tapping technique Gibbs’ employs on his guitar, it sounds at times similar to the texture and timbre of the Chapman stick with clear moments that clearly reflect that instrument. Dunmall chooses his sounds relatively sparingly, bearing in mind the gamut of sounds that could potentially be at his fingertips with the wind synth, whilst a lesser improviser might be tempted to sample a wealth of sounds from this Pandora’s box this is a trap that Dunmall carefully avoids.

Overall this highly charged and complex duo provides us with a type of micro-music with the playful development of small intricate melodic motives, which are constantly spun out with increasing variation in a stylized and controlled manner.