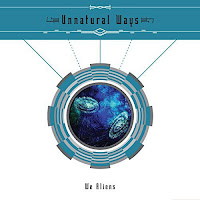 
John Zorn’s Tzadik has long been a label that supports artists of the uncompromising variety - one of the newest on the roster is Brooklyn-based guitarist Ava Mendoza and her group Unnatural Ways. Standing at the white-hot intersection where noise-rock, punk, jazz, and free improvisation meet, Unnatural Ways make songs that flirt with recognizable structures, then proceed to send those same structures toppling to the ground in incendiary vortexes of sound. Basically, imagine if the rapid-fire shards produced by math-rockers the Dazzling Killmen were married to the relentlessness of the DKV Trio - then, you might get something similar to what Unnatural Ways have served up here.

Things start strong with “Cosmic Border Cop,” in which Tim Dahl’s fuzzed-out, overdriven bass and Mendoza’s explosive shards of sound engage in what can only be described as sonic combat. Sam Ospovat holds down the fort, so to speak, pounding the kit with unshakable force and keeping the guitars from spiraling off into the stratosphere. For the most part, this is the M.O. of Unnatural Ways and what makes them such a thrilling listen: they find some serrated groove, slice it and dice it up even further into a hundred different rhythmic and melodic offshoots, then return, invigorated, to the root. On tracks like “Most of All We Love to Spy” and “Extraterrestrial Suicides Are on the Rise” they explore more varied textures - Mendoza uses guitar effects to her full advantage, producing sounds that squelch, stutter, and occasionally screech, while Ospovat clatters patiently underneath and Dahl stretches his bass-tones into shapes that are more comparable to alien transmissions than anything resembling rock music.

We Aliens is an album that simultaneously calls to mind the best noise rock groups, as well as the best free jazz trios - despite the jittery restiveness of the players, the musical ideas on display here are fully-formed, functional, and ready to fuck you up.
Paul on Tuesday, February 28, 2017
Share