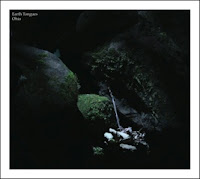 As the sotto voce tendrils of Joe Moffett’s trumpet, Dan Peck’s tuba, and Carlo Costa’s percussion slowly worm their way into your brain, early impressions place Earth Tongues’ minimalist music in the company of other “quiet scenes” of improvisation: lowercase, onkyō, Echtzeitmusik. But these are superficial classifications (as is often the case when trying to neatly “sort” improvised music). The trio’s music doesn’t feel like it’s about silence or subtraction or austerity in sound; it doesn’t really feel like it’s concerned with the theoretical elements behind its creation at all. Instead, to the extent it’s abstract, it’s the kind of innate, organic abstraction that can be found by looking at (or listening to) the natural world from an unexpected angle. Indeed, it was only after listening to some of Toshiya Tsunoda’s field recordings that I found the best listening “posture” for Ohio: to hear it as though it were some unfamiliar, ambient environment, the sonic footprint of a place I’d never been to, but where I could also never go.

Ohio is Earth Tongues’ second album, and it pushes even further into improvisational extremes. “Ohio, Pt. II” is longer than the entirety of their debut album Rune. The music—two long tracks totaling an hour and a half—slowly reveals itself, retraining ears to the nuances of its unorthodox cadence and inflection. During “Pt. I”, nearly 20 minutes pass before a horn raises a full-bodied tone, and half an hour before the suggestion of some momentum via hypnotic, pulsing cymbals. “Pt. II” plays with long, overlapping tones and resonances, perhaps a bit louder than “Pt. I”, but no less ascetic. Ohio serves as both a reaction to and an embodiment of the boundlessness of free improvisation: in its restraint, endurance, focus, and discipline it simultaneously rejects the excesses that freedom affords and opens up the sort of immense expanse where just about anything might be encountered.

“Silence is not the absence of something, but the presence of everything,” says acoustic ecologist Gordon Hempton, and this may well be the mantra of Ohio. Having been re-tuned to a fragile state of listening, huddling close, the listener enters a heightened space where sounds of the smallest size carry significance. But this vulnerability also allows the music to juxtapose its restraint with sudden intrusion, to inflict violence. After such a lengthy, hushed build-up, the blats of Peck’s tuba at the end of “Pt. I” are truly shocking—obscene, even. In its final minutes, it seems intent on jolting you out of whatever peace was to be found in its artificial ambiance, on reminding you how easily and utterly the quiet world can be blotted out by the noisy one.

Patience is rewarded by Ohio, and in the end it raises some interesting questions about the goals of improvisers and our expectations as listeners. Where do the sounds we choose to make fit into the natural order of the universe? And can they ever constitute a new one? Ohio doesn’t mimic the sounds of nature, but at times seems to enact a new realm of sound, one that feels primordial, prior to art and culture, something opaque and truly other. Or, as Tsunoda would say, it “fixes the experience of a landscape,” even if it’s a landscape we can’t literally visit.
Paul on Monday, March 20, 2017
Share