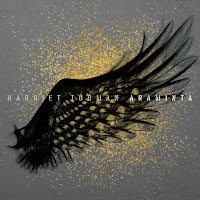 Harriet Tubman is the trio of Brandon Ross (guitar), Melvin Gibbs (bass) and J.T. Lewis (drums). They are named after the famous American abolitionist Araminta Ross who took the names from her mother and her husband to form the adopted moniker. This is only their fourth release in nearly twenty years and on Araminta they are augmented by trumpet player Wadada Leo Smith to good effect.

The album opens with ‘The Spiral Path To The Throne’ where Gibbs’ distorted beast of a bass is the first thing we hear before Ross’ guitar and Smith’s trumpet enter creating a soundscape that seems to reverberate with the essence of early seventies Miles Davis and David Sylvian’s Gone to Earth period. ‘Blacktal Fractal’ with its syncopated dub-like bass and rhythm is also another highlight with the trumpet and guitar complementing each other as perfect partners, soaring high together at the beginning before reverting to a more traditional soloist and accompanying role which never quite settles with its edgy interjections. ‘Ne Ander’ features the fantastic sound of Ross’ guitar, which sounds like it’s being strangulated. Over the top of Gibbs’ bass monster sound, Ross seems to choke the life out of his guitar with every note played, a giddy whirlpool of sound, with a strong rock beat provided by Lewis that nails it all together, before Smith’s trumpet takes over from the guitar that sounds like it’s passed out only moments before. Whilst ‘Real Cool Killers’ is reminiscent of the self-titled album by Levin, Torn & White a few years back – delayed and looped guitar parts, strong rhythmic drumming (a mechanical type shuffle) and a strong bass presence.

Overall Araminta is an interesting album that pulls on varied and different influences whilst bringing it altogether under the Harriet Tubman sound. With the wealth of experience gathered together from these musicians, including the weight of past and other musical affiliations, Harriet Tubman seems to contain a freshness for them, a possible tabula rasa or blank canvas that becomes its own creative entity. Including Leo Smith on this one is also a great addition and gives this album something extra. Smith’s trumpet gives the group not only another layer of sound but also an important instrumental focal point that seems to galvanise the other parts, pulling them together to create a greater musical and structural cohesion, which is enjoyable and worth a listen.