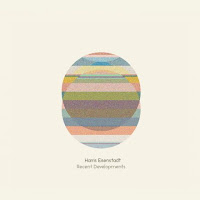 With Recent Developments, Harris Eisenstadt hits a milestone: twenty releases as a bandleader. By now it’s clear—if there was ever any doubt—that the Canadian-born, Brooklyn-based drummer and composer is here to stay, a fixture on the scene whose name, whether it appears on an album’s cover or deeper down in the credits, promises quality. Recent Developments bespeaks Eisenstadt’s veteran mastery not only in the music itself (more on that soon) but also in the details of its conception and production. Like a true professional, Eisenstadt made his initial compositional sketches on a nine-hour post-tour flight back to Brooklyn, working when he could have been resting. Even then he knew which players he wanted to work with, drawing on his established history of collaboration with some—Nate Wooley, Jeb Bishop, Dan Peck, Eivind Opsvik, Sara Schoenbeck—and his well earned reputation, perhaps, to attract others. Then, trusting his artistic process and maximizing efficiency, he refined the counterpoint, rehearsed the material with the band, and tested it live, saving a few final decisions for the day of recording. And the music has found a welcome home on Songlines, the Vancouver label that has become a regular host for Eisenstadt’s work. In short, this is a musician who knows what he’s doing.

Despite its newsletter title, Recent Developments is much more than a grab bag of tunes united only by their chronological proximity. Instead, Eisenstadt presents an ambitious suite of six parts, shot through with interludes and deliberately bookended. Setting up this quasi-novelistic structure, the album opens with a contrasting “Introduction” and “Prologue,” the former a nimbly darting duet for Anna Webber’s flute and Schoenbeck’s bassoon, the latter a dark and droning duet for bass and tuba. With twelve tracks to go—some less than a minute long, others five or six—some generalization may be in order. Parts one through six are longer and tend to be more through-composed, with an emphasis on groove, melody, and the aforementioned complex counterpoint. While they often layer in like Motown hits and feature some strong conventionally structured soloing, they also have a way of bottoming out in challenging solo or duo features and ending without a return to the melody. These six are the tracks most likely to get your feet tapping—“Part 2” positively swings, “Part 4” starts with second line tuba—or move you emotionally—Bishop’s smoldering solo on “Part 3,” cellist Hank Roberts’s surpassingly beautiful playing on “Part 6.” Throughout, there’s more masterful efficiency in the way Eisenstadt repurposes melodic material both within a track, trading it from one instrument to another, and between parts, creating echoes that tie the whole thing together.

Whereas Eisenstadt underpins even the more abstract moments of the main suite with punctuating unison figures, the playing on the interludes is—or at least sounds—freely improvised. And this is where the diverse instrumentation of the Recent Developments nonet really pays off. In an interview on his website, Eisenstadt makes an explicit connection between the album cover’s overlapping color-banded circles and the “wide range of timbral combinations… at the heart of the recording.” From the dark low registers of bass and tuba on one end to the flitting, brittle sounds of flute and banjo (Brandon Seabrook) on the other—with cello, trombone, trumpet, and bassoon in between—Eisenstadt has a veritable palette to paint with, exploiting varieties of density and texture as he layers his players up. The result is perfectly balanced—like Eisenstadt twenty albums in, never satisfied to stay in any one place or play to any one expectation for too long.