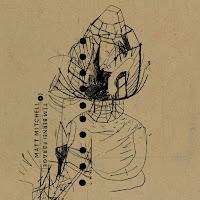 I have been a long time fan of saxophonist Tim Berne, catching when I can his concerts and covering his Snake Oil albums and the brilliant BB&C for the blog. His complex and interlocking melody lines have always been a draw, his music wraps around itself, like vines growing up the tree, overlapping and intertwining, beautiful, and sometimes overwhelming.

Pianist Matt Mitchell has been working with Berne for several years in Snakeoil, in addition to many other high profile and adventurous musicians such as Rudresh Mahanthappa, David Douglas, Darius Jones, as well a leader releasing some well-regarded albums like 2015's Vista Accumulation. Somewhere along the way, he found the time to make this illuminating solo piano recording of Berne's music, revealing both his own musical conceptions and the strength of Berne's compositions.

On just the piano, Berne's abstract and complex melodies are unraveled and untangled, then re-positioned, re-layered and re-tangled. The sinewy music strongly associated with the composer holds up remarkably in all of it tough and fragile beauty. The title førage also says a lot: this is not re-interpretations of scores, but rather a mash-up of ideas. Mitchell went through Berne's ample discography, selecting songs and melodies and put them together in his own way.

The first track, 'PÆNË', is calm as the opening chords move in an unusual progression, the melody is almost soothing, but it's not easy listening, rather it's accessibly demanding. The second track, 'TRĀÇĘŚ' is more angular, more jumpy, and the kaleidoscopic melody fills the space around the listener like small shards of colors turning in all directions. The slightly askew melody locks in with the rhythm in such a way that it is unclear if a beat is being skipped, but then again, it locks in so tightly that it's hard to imagine a beat missing. The third track, 'ÀÄŠ', is sublime. A sparse and evocative melody slides between the cracks of a suspenseful chord progression. As the song progresses it grows heavier, denser, and some of the hopefulness felt at first, turns darker, but towards the end, unfolds into a spacious soundscape. Mitchell is an energetic player, his broad use of dynamics and expansive approach reveals a great deal of emotion within the music through out the whole recording.

It is a true pleasure to get lost in Mitchell (and Berne)'s sonic maze. Over the course of the 58 minutes of førage, Mitchell shows a deep appreciation and understanding of this music, which comes through in every note, shifting tempo, and interlocking rhythmic phrase. Released on Berne's Screwgun records (which had been quiet for a while), førage also features a classic Steve Byram cover on a signature brown cardboard cover.